I know you may get tired of my saying it . . . but if you go to the range, have a purpose.  Why are you going?  What do you want to work on?  What will be the weapon/weapons of choice?  What targets should you bring?  Are they “scorable” so you can track your progress?  Finally, what do you have time to do without rushing your range session.  And that’s what I want to spend a bit of time on . . . range trips, they take time.


Last weekend I was range master for a BSA BB Gun Shoot at our local scout camp.  We had 24 lanes, 400 scouts, 300 parents and ½ hour sessions on the range.  In fact, for all but 3 of the ½ hour sessions from 9AM to 3PM we had to double up on the first 6 lanes to serve all the Cub Scouts that wanted to shoot.  I find I take heart at this for the future of shooting sports!  The kids love it! 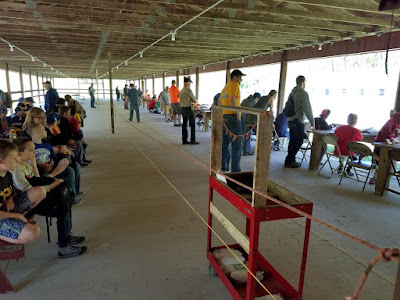 I have a fondness for likening Cub Scouts to Labrador puppies.  Trying to quiet and calm them so you can get real work done is a challenge to say the very least.  That said, I suspect we’ve all seen adult sized versions of Labrador puppies at the ranges we frequent.  They come in, throw up some kind of target, rip off a handful of magazines in a 20-30 minute session and off they go.  It becomes apparent that the primary purpose of the trip is to make holes, smell gunpowder and hear the BANG!  Like the Cub Scout they’ll take their target home (scouts will literally take the target home for the fridge) either in their hand or as a memory of “boy that was a good string of fire!!”  I’d like to offer another POV . . . slow down, take your time savor each round or string.  Note it, make it mean something and then build on it.


I think my primary efforts this summer will revolve around rifle shooting.  That seems to be my focus over the past 7 months or so and there is surely much more work to do.  So, it was natural that today’s range trip was dedicated to that particular skill set.  I’m still slugging away as much of the foundational elements so the two rifles I chose to take was my 1932 Stevens 53B single shot and my Ruger 10/22 Target with a Nikon scope attached.  And, a “Bucket O Bullets” (how can you beat 1400 rounds for $86).  Tonight was to be just plane marksmanship from the bench.  The Stevens is just held on the bench, not bagged in any way.  The Ruger has an attached bipod.  Both have “firm” triggers that require focus for a smooth trigger press straight to the rear.


I took two types of targets.  One has 5 individual targets that are 3 inches in diameter on it.  I use these for the NRA Rifle Instructor course for their qualification shoot since this is the proper size target for a 50’ range.  They’re of my own design so if anyone wants one let me know and I’ll email you the PDF.  The second target is the free target provided by the Appleseed Project.  It is my intent to attend one of their courses this summer which is another reason for my increased range work.  They are sized to represent a “Red Coat” at 100 yards, 200 yards and 300 yards.  Since this trip was just working on the fundamentals – mounting the weapon, sight alignment, sight picture, trigger press and follow through – I chose to fire 10 rounds on each target for a total of 80 rounds with each rifle.  As I said, range trips take time. 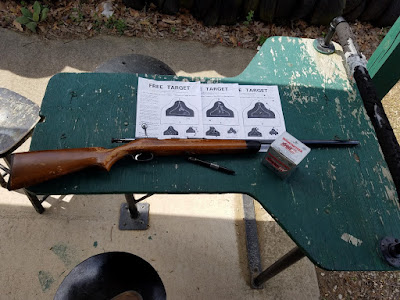 The range session began with the Stevens 53B and the target with the 3” circle targets.  It has a simple set of open sights on the rifle that has served its various owners for pushing 85 years.  Think about that . . . 85 years.  I spend a fair amount of my time with Scouts and their shooting sports programs.  When I bring them to our local Ikes range to work on their rifle merit badge I insist that they shoot at least one qual target with the Stevens.  I do this so they can understand it’s not about a brand-new gun with a good-sized scope on it . . . rather, it is ALWAYS about the fundamentals.  My first string of 10 are in on the upper right target.  While the group fits within the required 3” circle, it is  not with in THE 3’ circle.  And, as it typical, it’s never about the gun but the shooter.  It took me one string to remember that the Stevens is set for 6 o’clock hold.  Once I switched to the upper left target and placed the front blade just below the black dot, things were much better.  One factor that plays into my shooting over the past 10 years or so is that if I wear my glasses the front blade is crystal clear while the target is kind of a fuzzy blob.  I chose to forgo my prescriptions providing a fuzzier front site but a crisp target.  This works best for me.  And, my accuracy and precision picked up notably.  Most the groups were well within a 1.5” group and fairly well centered on the target.  For 50 rounds, I dropped 2.  I’ll take it. 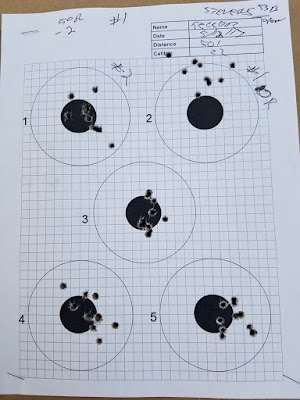 The nice thing about the Stevens – or any bolt action for that matter – is that it naturally slows you down.  You get 50 chances to mount the rifle, stabilize your body, get a good sight alignment and sight picture and then smoothly press the trigger straight to the rear.  Your body needs this time to learn this specific skill set to improve your ability as a rifle shooter.  There is simply no shortcut.  So, take the time to develop your foundational mechanics.
Next up were the Appleseed targets.  For tonight I simply put 10 rounds on each of the 3 targets simulating 100 yards, 200 yards and 300 yards.  On these I dropped 2 rounds out of 30.  If you take the time to read the proper way to use this target that is listed on the left, it requires a pretty solid set of skills shooting standing, kneeling or sitting and finally prone.  We’ll work on those over the rest of the summer looking towards their end of August course offering. 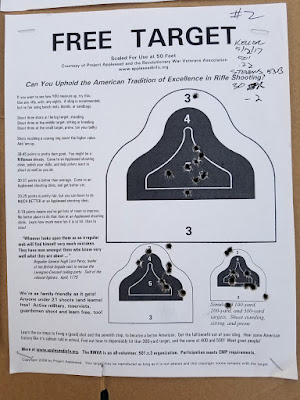 I put the Stevens away and set up took my Ruger 10/22 Target out and set it up. 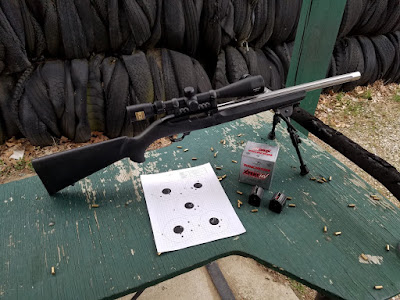 This was a repeat of the 5-target sheet with 3” targets and 10 rounds on each target.  I have mounted a Nikon Prostaff 4x12 40mm Rimfire scope on the Ruger Target.  It should be noted that the max magnification at 50 feet without blurring is about x7 so that’s what I used.  I also used Target 1 to tweak elevation a bit as well.


The expectation with a scope is that the group size will ALWAYS get much smaller.  While generally true it will never get better if your foundation is poorly developed.  Mounting the rifle, loading the bipod, a solid sight picture, smooth trigger press and a good follow through is just as important with a scoped rifle as it is with a rifle with open sights.  The groups were generally smaller with most being 1” so that is an improvement.  But, there are way too many shooters that use the scope as a replacement for a refined skill set.  If you find you may slip into that category, find an open sight rifle and spend some time with it.  It will greatly increase your accuracy and precision with a scoped rifle.  As you can see by the first 50 rounds, I was down zero with good accuracy and precision. 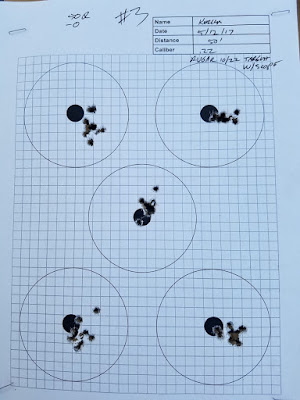 On to the “Red Coats”.  The 100 yard and 200 yard targets look pretty darn good.  The 300 yard target is not all that much different from that of the Stevens rifle.  Clear evidence that is you let the fundamentals slide on any group of shots, you will pay the price regardless of the rifle you are using.  For the Stevens, I can maybe pull the “yeah, but . . . open sights”.  With a scope rifle it is ALL foundational stuff.  Perhaps the fact that by this time I’d been shooting for about an hour and a half and I was starting to tire.  But . . . the target simply doesn’t lie. 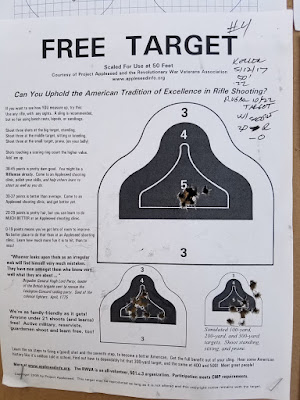 So what’s the take away.  It takes time and work to build and refine a skillset.  Accurate and precise shooting takes just that . . . time and rounds down range.  As I discussed a few posts back a good .22 caliber rifle with a good scope or set of open sights is a solid training tool costing pennies per round to get really good work done.  If you’re intent on becoming a good rifle shooter – this isn’t a bad place to begin.