So, it’s that time of year when I begin to register for coursework I plan on taking . . . and taking appropriate steps to make sure I have the right gear to take the course.  One of them that I’ve signed up for is the Gunsite Indiana 3-Day Carbine course.   I took their 3-day 150 Pistol Course at the same location last year and came away with a very good experience and – just to brag a bit – 2 of their 3 challenge coins!  It was a great trip, you can find a review here.  I was delighted to see they were bringing their carbine class this year so I signed up on-line and am in the process of polishing off the paperwork.


That said, when I take coursework that is more than a little pricy I also make sure I take a full set of duplicate gear.  I’ve heard the phrase “two is one and one is none” attributed to Col Cooper in the past.  Regardless who first used that phrase, there is a great deal of truth to the words.  Just think of traveling a full day, spending a couple thousand dollars once ammo, gas, food and lodging is thrown in . . . only to have your weapon fail you on the first or second day of class.  For me this isn’t my first carbine class so I have a backup weapon.  It’s a mix of a Bushmaster Upper, Timney trigger, who knows what adjustable stock and a Blue Force sling.  It had a Nikon Prostaff Scope and Harris Bipod on it since I was using it to work on my distance shooting.  Obviously, some changes needed to be made to bring in more in line with my primary “patrol rifle” which is a DPMS Oracle with an Eotec red dot on it and Magpul pop up backup sights.


The backup sights were a no brainer so I picked up a new set of Magpul front and rear sights.  One characteristic of this particular rifle is that the rear peep on the popup needs to be cranked fully to the left . . . and I mean FULLY!  I suspect that is due to some offset between the front and rear top rails or something physically with the barrel.  But, it is an “adjustable” rear sight, and cranking the rear peep all the way to the left works . . . so I’ll figure the rest out later.

I have a number of shooter friends who have Vortex scopes on their precision rifles.  Of course they are more than a little pricy.  But they also have a Strikefire II Red/Green Dot optic for around $180.  Could that be my answer?  After looking at one at a local dealer, reading some of the reviews on line and watching a couple review videos I decided that for the backup carbine this choice would be more than good!  I went to the range today . . . I was not disappointed! 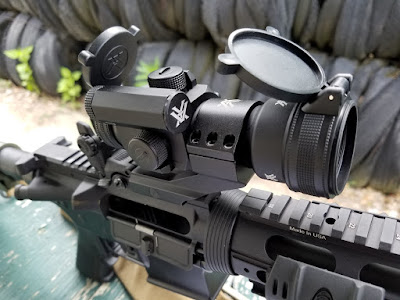 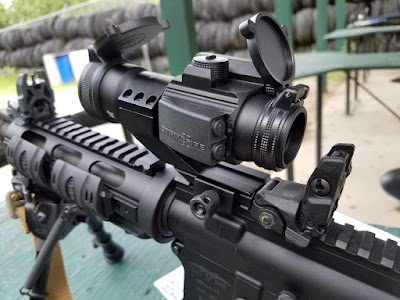 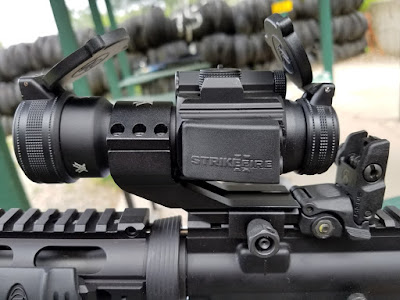 As you can see it is a bit bulky physically but it weighs just 7.2 ounces.  It comes with a cantilever mount allowing the rear Magpul popup to snug right up to the rear of the optic.  Both sights co-witness perfectly.  There is an elevation adjustment on the top along with a battery housing holding a CR2 battery.  Battery life is in excess of 300 hours at max brightness and approaches over 6000 hours on minimum brightness.  The windage adjustment is on the right side of the optic with either a red or green 4 MOA dot appearing in the middle of the field as you look through the optic.


Operation is via two buttons located on the left.  Press the top button, it comes on.  Hold it in and after about 4 seconds it will turn off.  Hold the bottom button in and the color will switch to either red or green.  With the dot on, momentarily pressing the top button increases the brightness while doing the same with the bottom button decreases the brightness.  The optic is very crisp and clear.


I loaded a magazine with 10 rounds, set out a “10 yard 50/200 zero” target and sent three rounds down range.  I was more than a little surprised that all three rounds within the impact dot on the target.  The three rounds were followed by an additional 7 . . . all with the same result.  As you can see, the optic was perfectly adjusted for a 50/200 yard zero OUT OF THE BOX!  Gotta say I was very happy. 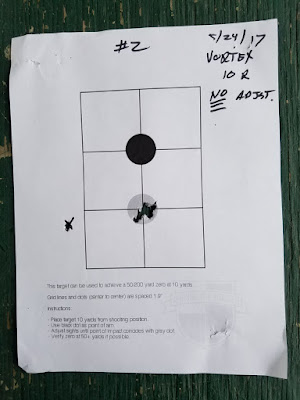 Honestly I was having a bit of trouble adjusting windage on the Magpul sight so I “cheated” and simply dialed the windage until the front and rear co-witnessed with the Strikefire II (which turned out to be all the way to the left).  Worked well with the final 10 round target showing all rounds within or touching the impact dot. 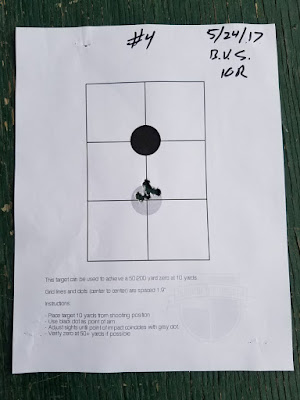 The next test was to move the target out to 50 yards.  For that I’ve built an evaluation target with two impact targets for evaluation on it.  The top left target shows the results using the Strikefire II.  The first 5 round group was high and spread out.  “High” was an elevation issue.  The “spread out” was a shooter issue.  So, I adjusted elevation down a couple clicks and sent another 5 rounds down range.  Group two came right in. 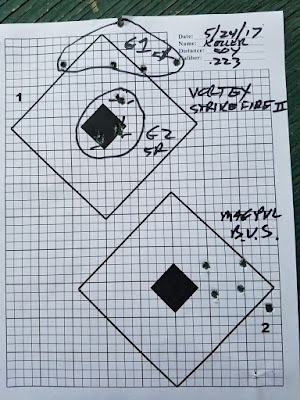 Next was 5 rounds on the lower right target with the backup sights.  They turned in a nice 1-inch group with one “flyer” out another ½ inch.  I’ll take it.


One last target.  10 rounds on the target I use for pistol qualification in my defensive shooting classes.  The target was posted at 50 yards.  At that distance, the dot pretty well covered the grey disk entirely.  Again, the Strikefire II turned in a nice group. 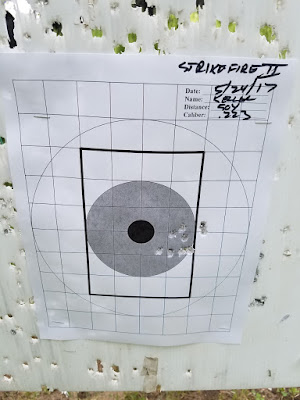 I had around 15 rounds left over so I went over to the 100-yard range and shot at the 12x14 steel plate at the end of the range.  It had no paint on it and sat against a berm essentially the same color but I was able to hit 13 of 15 rounds on the plate.  This gave me an opportunity to play with the intensity of the green dot and I found that at a lower setting I could clearly see both dot and target well. 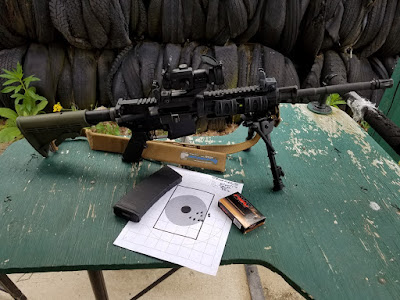 Bottom line, I’m pretty darn happy with the performance of the Vortex Strikefire II red/green dot optic.  The class is the beginning of July so we’ll see how things go actually “running the gun”.  I plan to run the backup gun at least one full day provided my primary doesn’t fall apart in my hands.  That has never happened through any number of high volume classes.  But . . . the one time I go with a single weapon I am confident that murphy will bite me in the butt.  Stay tuned, the AAR for the Gunsite 3-day Carbine Class will be posted when I return from the course.
Strikefire II Vortex Page