In 1947 Edward Murphy was involved in experiments involing measuring human stress while riding a rocket sled.  He had an assistant install 16 strain gauges to meaure the stress . . . only to have the assistant install all 16 backwards.  This lead to the very first iteration of “the law” . . . "If there's more than one way to do a job, and one of those ways will result in disaster, then he will do it that way."  Over time this has morphed into “Everything that can possibly go wrong will go wrong.”


I’m going to combine a couple examples here – one noted during training some regional LEOs . . . and one where Murphy smacked me up-side the head.  As Han would say – “Don’t get cocky kid!”  First, fall qualification for some officers from a couple different communities in my area.


I have been using 45 rounds at the beginning of a qualification shoot for a review and evaluation period.  I begin with the “Drive, Touch, Press” drill and move up to controlled pairs.  Typically three “dots” are placed on the target with one for the Drive, Touch, Press drill, one for a single round engagements and the final for controlled pairs.  This gets over the initial nerves of a qualification shoot, allows me to evaluate and tweak things that have slipped a bit sideways and just to “break the ice” just a bit.  Once this is complete the qualification shoot begins.  The instructor in charge was using the marksman ship course beginning with 18 rounds at 25 yards and moving forward from there.  There were a couple re-shoots involved but by the end of the night and the low light portion of the qualification everyone had successfully qualified.


However . . . a few areas of concern did pop up.  First off, I’m just a civilian schlub . . . I am not an officer, I do not patrol our community and am not involved is the daily encounters that may well test an officer’s ability to use their firearm.  That said – I carry every day in every location I am legally allowed to . . . and I train and take coursework throughout the year.  This is where one of my concerns come to the fore . . . I would venture that most officers only visit the range when it’s time to qualify.  Of those officers that attended the qualification shoot there were only a couple that regularly visit the range . . . and the VAST majority do not take independent training.  I shared in a “fairly direct fashion” my thoughts on this topic.  Yep, I know coursework is expensive, time consuming and that training on your own is as well.  However, an officer’s ability to respond appropriately, accurately and lethally if necessary may well be the difference between going home or going into a ZipLoc.  The same can be said for civilian shooters.  Please . . . take good coursework and train on your own on a regular basis.


The other benefit to consistent individual range training . . . you actually run your duty gun in a “safe” environment rather than drawing in with the need to defend your life.  You increase your skill level while confirming you have a working weapon.  We had two officers who finally had to switch to an alternate weapon because the weapon they were using – their duty gun – would not function properly.  Take just a moment to let that last sentence soak in . . . their duty gun would not function properly.


In this case “Murphy” simply caused some good natured ribbing and some serious cautions  about how well things would go should their day go sideways in a really big way . . . with their duty gun inoperable.  Murphy is always waiting . . . looking for a vulnerability . . . a chance to make your life difficult.  The best way you can guard against “his” efforts is to be diligent in your training.


No guarantee . . . but at least an opportunity to circumvent a worst case scenario . . .


So on to my own personal experience.  I am sitting with the local PD Captain who is the primary training officer.  We are laying out the local recertification schedule, chatting about some paperwork I’ve been remiss in turning in (fixed that this afternoon) and talked about an opportunity to go to an AR15 Armor’s school.  Also . . . the upcoming carbine class.


This is taught by the Captain (he’s on the staff of the ILEA) and I’ve been invited to take it so I can see how he teaches it so I can lend a hand there as well.  Cool!  So I was telling him about my recent range trips, how my carbine performed, the course of fire, how I needed to use iron sights because my batteries were dead (Murphy – always looking out for me) and how well my irons had held their zero.  As I said those words I felt just a bit of a tingle on the back of my neck.  While I had just recently evaluated myself at 50 yards, it had been probably over a year since I’d pushed out to 100 yards with either my Eotech or the irons.  Well, today was Friday, the weather was yet again specatacular and my desk was reasonably clear . . . I grabbed a hundred rounds and headed to the range.  Now I’m already seeing this in my head . . . send a quick 5 rounds down range to check the zero on my Eotech.  Then another with my co-witnessed irons . . . 15 minutes I’m done and can get on with the fun stuff! 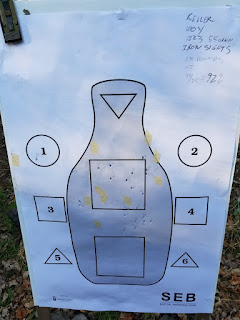 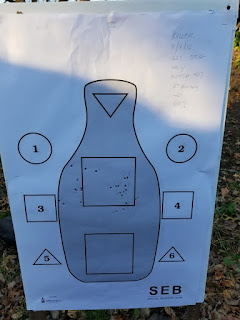 So what’s the lesson here . . . “Don’t get cocky kid!”  I “knew” that my carbine just plain held it’s zero . . . period.  I KNEW it . . . yet it had not.  I fell into the same trap . . . and had not shot at distance in way too long.  Should I have needed AR to defend against a threat at distance to protect myself, my family or someone in my charge . . . it would not have gone well.  I was NOT diligent in training on all my platforms.  Such sloppiness might – if Murphy is feeling particularly vindictive – prove fatal.