I suspect I’m not a lot different than most instructors who see a fair amount of folks looking to get their concealed carry permit – or whatever moniker is applied in the person’s state of resident. I will get them exactly and precisely one time in a class. While I may wish that they take a second or third class to get them where they “should” be . . . time, money, desire will typically limit an individual to a single class that “fills the square” for the state the person lives in.

State requirements are vary wildly – from full Constitutional Carry to a 2-day, 16 hour class. Then add in everything from an annual recertification requirement and substantial license fee to just signing a form and sending a couple bucks . . . and the landscape of the firearms trainer is a mottled one at best.

There is certainly a core of students that take annual training, spend significant range time each month and put their heart and soul into their craft. My experience is that many of these folks are instructors in their own right . . . or card carrying members of the “gunnie” community. Compared to the bulk of the population . . . they are a miniscule bunch at best – microscopic at worst.

I also suspect that most instructors are intent on making sure the student walking out their door are prepared as best they can be to apply for their first carry permit – even though they have taken just a single solitary course. Real instructors, those dedicated to doing the best with the resources of time, space and money are committed to giving their students the best information and skills possible as represented by the course taught.

Years ago it became apparent that many of the courses out there were either the “tacti-cool” course on one end of the spectrum . . . or a basic shooting sports course on the other. This simply was not meeting the needs of the folks walking through my door. While the “square was filled” as far as the state was concerned – the need of the student was not being met. So, I put together e.IA.f.t.’s Defensive Handgun 1 course.

It was well received, reviewed by local friends that were both fellow instructors as well as LEO instructors. Tweaks were made, changes implemented, range work refined . . . all to a good end I think.

A couple years ago I made friends with a fellow instructor who had been developing what was essentially a “what comes after HG1?” course. And a friendship was begun. Over the past 2 years we worked together and in  January of this year (2105) a group was formed – Midwest Association of Professional Shooting Instructors. Regional instructors were invited to join, they were asked to review our coursework, more refinement, more review, vetting the coursework with other organizations and with each other, teaching the coursework to each other and, finally, in late summer this year our Foundations of Defensive Pistol, Basic Defensive Shooting Skills and Essential Defensive Pistol were finalized. You can read our history and course description at our website located here.

Which brings me to this past weekend . . . and the four folks who had come to town to take the M.A.P.S.I. Foundations of Defensive Pistol. They could have picked a better weekend . . . me as well for that matter. Friday night our first blizzard of the year rolled through with the morning seeing 8 inches of the white stuff across the landscape. Still, when the doors opened at 8AM all four were there, two women and two men.

I always begin course development with this question . . . When they are all done, when the end of the course has been reached, what do I want them to know? For the FDP course, in a nutshell, here is what I wanted them to know . . .

It is as full a day as it looks like in that paragraph. The course intros began with a SA revolver and ended with a DA/SA Semi-automatic pistol. Continued with the purpose and selection of a proper firearm for the student, how to select a gun belt, holster or off body option. Students were introduced to how ammunition works and then how to select a defensive round for their carry weapon.

Finally, it was time to head for the range. 8 inches of snow made it interesting. The range work was done from the 5 yard line. We began with single round engagements and worked up through accelerated pairs. Included were malfunction clearing and magazine changes. The temperature was in the low 20s when we began and finished up at about 12 when we ended. Yet everyone stayed focused, got their hits and successfully completed the 30 round qualification course.

By the time we hit 4:30PM the final exam was done, certificates were passed out and the final group photo was taken . . . a fine time was had by all and there were for folks fully trained and ready for their Iowa Carry Permit. 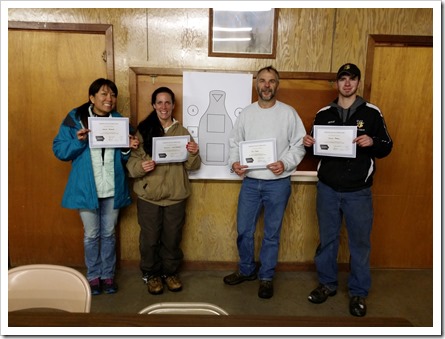 Congrats to Naoko, Ashlyn, Ricky and Jay! I look forward to having you in one of our future courses.

Posted by eiaftinfo at 4:19 PM