Just the Basics - Triggers - They Matter

So bit by bit I’ve crept down the rabbit hole of long range shooting. I think I’ve reached the bottom of the first level with this post . . . Triggers – They Matter. Obviously, as with all things “geek” there are virtually no limits to details, new gear, shooting techniques . . . I get it. I think it’s one of the things I enjoy about defensive shooting and this introduction to long range shooting. That said, this post will close out the “introductory phase” of my learning process – with more to follow I am sure.

There is, perhaps, no single element that affects an accurate and precise shot more than “consistency”. A consistent cartridge – from the case to the powder to the primer or the bullet weight to the precision of its assembly is one of the first requirements. Then there’s the barrel built just precisely to impart the correct rotation as well as velocity. There is the optic that can be aligned to match the ballistics of the cartridge as perfectly as possible. There is the peripheral gear – scope levels, bipods, shooting bags. All of these items must align to produce a weapon that consistently delivers and accurate and precise shot each and every time the trigger is pressed.

So, it seems fitting that that is where I end this portion of my exploration . . . where the final act of firing the rifle ends . . . with the end pad of my right hand trigger finger being smoothly pressed to the rear until the trigger breaks, the sear is released and the hammer strikes the firing pin. This last little piece of the puzzle that must be consistent to insure that I can shoot the rifle to within its manufactured capabilities . . . and my desire of having a 1 MOA .223 rifle to continue to learning with.

So let’s see where I started out. Below is my final target from a couple weeks ago when I mounted my Nikon Prostaff BDC scope to my backup .223. 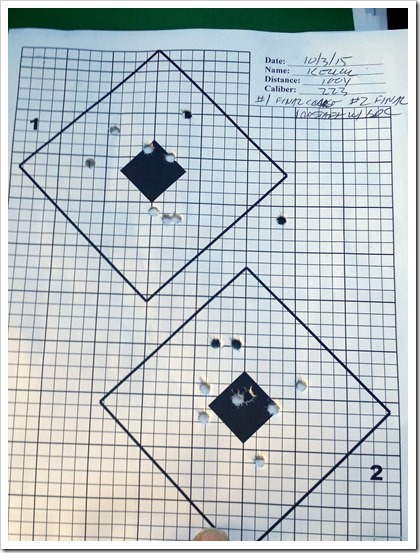 Notice that overall the shot placement was accurate and I had a number of precise groups . . . yet the overall group size was closer to 2.25 MOA rather than my desired 1 MOA. The weapon is a “build” with a Bushmaster upper, an inexpensive lower receiver, a DPMS lower receiver kit and an off the shelf, no name stock. Nothing tricky because my intention was to use this carbine as a backup for the CFS course I took this past June. What I noticed was that once my scope was mounted and my final adjustments were made – trying to breach that 2 MOA level of accuracy was something I simply could not pull off. What I did notice was that the trigger break was fairly inconsistent with some being “normal”, some being “heavy”, some feeling like kind of “grindey” and a few that were smooth. Since I had noticed a real improvement when I replaced the trigger group in my AR-10 with a new Timney trigger group I suspected that the same would be true with my backup AR-15. So I punched up Amazon and made yet another withdrawal from the credit card’ s limit. 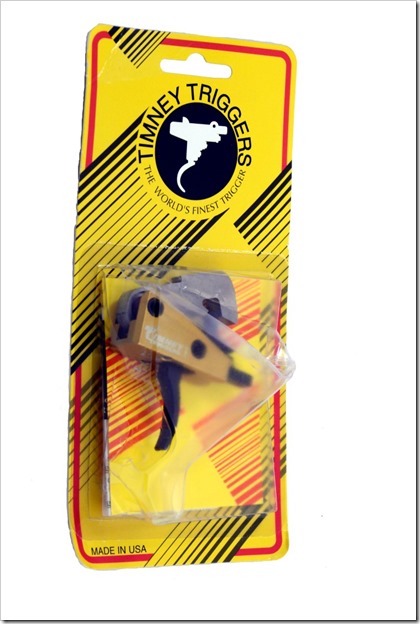 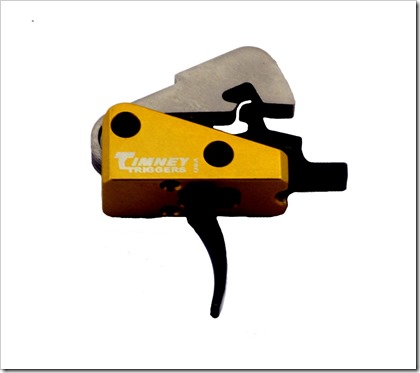 So, was the result noticeable? After firing 10 rounds to get the feel of the new 3lb Timney trigger, I settled down to shoot two more targets doing my very best to perform the fundamentals properly . . . good placement of the scope crosshairs on the target, light touch on the grip, bipod properly loaded, good cheek weld, rear bags properly in place, breathing naturally and pressing the trigger smoothly during a respiratory pause . . . 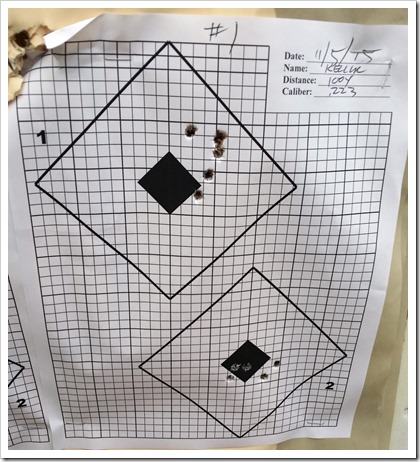 I’m happy to say I noticed real improvement with each target showing a 5-round group – on each - now at 1.25 MOA - a significant improvement.

There is value in answering the question of “why the difference”. If you take a moment and look at the DPMS trigger group first notice that it consists of three primary components – the trigger, the sear and hammer. There are also two springs on either side of the trigger group to provide enough force for the hammer to strike the firing pin to ignite the primer. These come as a loose set of parts. Two pins slide through the lower receiver to hold the trigger group in the proper place . . . to a point. But past that the group has a fair amount of wiggle room. It is this wiggle room, this inconsistency from one trigger press to the next that can introduce the differences I spoke about earlier. These small inconsistencies add up resulting is a less than desirable group size. I am not saying that even with these inconsistencies the weapon does not meet my expectations of a defensive firearm – it does. But when I began to desire an accurate and precise shot that my expectations were not met.

Now, look at the Timney trigger group. It is a precision piece of gear that is machined and assembled to an exacting standard. Each and every trigger press is exactly 3 pounds. All the components are mounted in a housing that is in turn positioned by the mounting pins but the entire group is then held in place by locking screws. There is no wiggle or subtle movements. This insures that each and every trigger press is exactly the same. And that had a profound effect on the accuracy and precision of my group sizes. It was well worth the cost and effort to move this weapon to the “next level”.

I had mounted the targets to a standard “Q” target that had been used while I had helped our local PD complete their annual qualification shoot the night before. There happened to be a clean “head” to shoot at so I loaded another 10 rounds and shot 5 groups of accelerated pairs. Shot a 90% when all was said and done, I’ll take it for now. From here on out, it’s on me . . . to practice the fundamentals, to spend the range time to improve, to demand that I get better and to continue to take course work to develop this portion of my shooting skillset.

Saturday will be my first long range shooting competition. We’ll see if I can keep my head in the game for each and every shot. 6 stations, right at 60 rounds out to 800 yards. Honestly, I’m kinda excited!