Saturday, November 7th turned out to be a beautiful day. The morning was clear, temps were in the very high 30s but the wind was brisk directly out of the west at a solid 10MPH. All in all, not bad weather for the beginning of November in Iowa.

I got to the Sure Shot range around 9:30 AM and there was already a good sized group of observers and shooters. I signed in, signed the typical waiver and then we waited for the safety brief. John See started right on time with the safety brief. At the end we were split into two flights – one contained shooters 1-12 and the second shooters 13-23. I was shooter 14, in the second flight and started in the prone position.

There were 6 stages to the shoot. Let me take a walk through them. 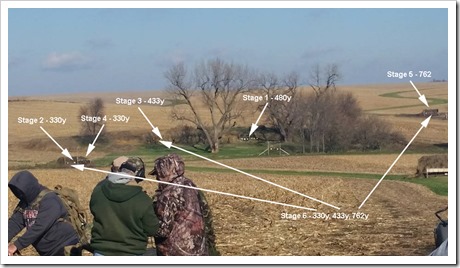 Every once in a while a shooter needs to jump into something way outside of their comfort level. That is where I was as the brief started. Everyone is whipping out a little notebook jotting down the stage specifics (I had one and soon followed suit), many had placards or cardholders strapped to their support side wrist that they put their scope dope on. There were some beautiful weapons on display with high end optics . . . yep, I had not played on this playground in the past . . . it was going to be “interesting”.

Once the brief was done the two groups moved to their separate areas – one with the three barricades setup and the other the firing line for the prone position. Each had a spotter to call the hits. My first stage was Stage 4 – the speed drill. Four plates, 330 yards, two hits per plate with 8 rounds in your magazine. The first shooter cleared the stage within time and then it was me. Heavy sigh . . . the fact I’d had little time for long range work since my long range class, that I had a new scope and few rounds behind it came to the fore pretty darn quick. Eight rounds . . . zero hits . . . yep . . . zero hits. Heavy sigh. Ah well, I’ll better on stage 7 when my turn rolls around . . . was what I told myself.

Still, there was much to observe and learn. The contents of their pack that followed each shooter, how to use dope cards, watching them dope their scope prior to their first shot, how they settled into position behind their rifles . . . how to position on barrels (whether the barrel is vertical or horizontal), on cattle gates, on tires . . . so much to learn, so little time.

So why even bother with this short AAR? A couple reasons I think.

I wanted to share the type of stages that were set up so those of you considering poking your nose into this sport would have some idea of what to expect.

I wanted to share some of the photos of the match that were posted by the shooters – it gives a pretty good idea of what shooting this match looked like.

Frankly I wanted to share my own discomfort at jumping into the match . . . if you’re not trying things that have a bit of “butt pucker” . . . you’re not pushing yourself and you’re not growing as a shooter.

If you’re not observing, learning, asking questions . . . you’re taking “the long way home”. If you’re looking to grow in a skill set – find folks really good at it and learn first-hand what works for them . . . then see if it works for you. Push, learn, expand your skills . . . oh . . . and have FUN WITH IT!

To balance out a crappy end to my match day the customer’s system came up fairly easily once I got to my office and could punch into their system. By the time I was done they were happy and their employees could once again use my software.

My advice? Find your weakest skill set, start to work on it and polish it . . . then find a competition in the area that pushes you in that specific area. You will learn many things about yourself, your ability to shoot and you’ll make some new friends while you’re at it.

Posted by eiaftinfo at 9:31 AM