Back in June of this year I attended Rob Pincus’s CFS course for the carbine. You can read the complete review here. One of the things that I noticed was that in coursework when I ran my Panther Arms Oracle hard . . . it didn’t perform very smoothly. Honestly, that was the case for many of the shooters. While working on my home range with range trips sending 100-ish rounds down range, things ran pretty darn smooth. However, with the volume of fire required for the CFS course . . . things got “sticky”. One of the “hitches” turned out to be the charging handle . . . it didn’t work very smoothly at all. Let’s look at that and see what options are out there to work out the issues I was having with this component of my carbine. 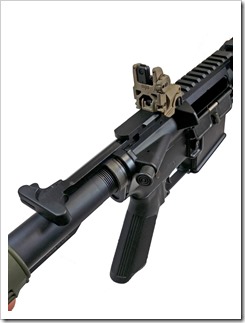 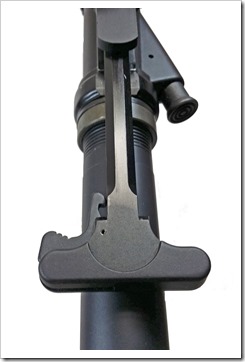 The bolt carrier group is that part of the carbine that ejects a spent casing, strips a new round from the magazine and pushes it into the chamber, it contains the firing pin and performs the primer strike when the trigger is pressed. In gas driven ARs gas from the fired round is captured, routed back to the top of the bolt carrier group and is used to drive the bolt rearward executing the tasks listed above. This process is similar in concept to the firing cycle of a semiautomatic pistol.

There are times though when a shooter will want to “work the bolt” to clear a malfunction of their carbine or to simply clear the AR. Part of the clearing drill for a semiautomatic pistol is to rack the slide to the rear and release it. For the AR platform carbine this is replaced by moving the charging handle firmly and quickly to the rear and then releasing it.

The charging handle locks in place when pressed forward. Grabbing it will move the “lock” so that it may be drawn to the rear. It is cantilevered off a roll pin typically located to the left of center of the weapon. This roll pin then takes the entire load required to move the bolt to the rear. When things are working well, and the bolt carrier group moves fairly easily in the upper receiver. That said, you can definitely feel the added resistance due to the fact that the roll pin is offset to the left and this has the characteristic of canting the charging handle in its channel as it is moved rearward. This does a couple things – it makes things “sticky” and it can easily move the aim point of your carbine off the threat.

My primary carbine training has its foundation in the very late 60s. To clear the weapon or to work the charging handle one held it firmly if your dominant hand, grasped the rear of the charging handle firmly, yanked it to the rear and then released it allowing the bolt to return forward. This was done while pointing the weapon slightly downward as the process was performed. When I took the CFS course Rob introduced a different process. Keep the carbine mounted and on the threat – and work the charging handle with your support hand. Yes, I know there are “issues” for left handed shooters. Stick with me anyway. The advantage to this method is that I was able to keep my focus on the threat while I worked the charging handle. The disadvantage was that with a standard charging handle design and the offset roll pin – the additional friction as I worked the bolt it would move the weapon around and, sometimes, it just plain got stuck and I had to go back to the old method. Rob’s comment was simply “upgrade your charging handle”. So, here we are.

The upgraded charging handle I chose was the BCM Gunfighter Mod 5. It has a number of advantages. It is well constructed out of T6 aircraft grade aluminum. And – it’s biggest advantage – it was designed in such a way that the roll pin DOES NOT take the load when the charging handle to moved rearward. When the release is pressed the cantilevered portion is designed so that all the force is applied directly down the centerline of the weapon. This makes a tremendous difference in the amount of friction present when the bolt is worked via the charging handle. And, for times when you’re trying to clear a failure and you need to get “aggressive” – this design makes things much beefier since you are no longer relying on the roll pin to carry the weight. 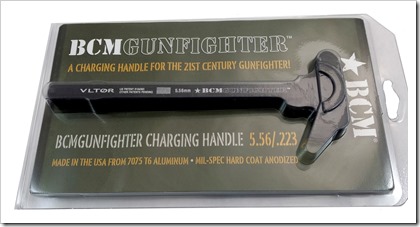 Bottom line – if an AR platform carbine is part of your personal defense system – make this change. You won’t be disappointed!

Posted by eiaftinfo at 1:19 AM