Just the Basics - Prep for a Long Range Shooting Class

I’m preparing for a long range shooting class in about 2 weeks. As I’ve said in the past, I’m not a real long range rifle shooter, it’s just not my thing. That said, the opportunity to take a class from someone who has competed and succeeded on a national level . . . how could I pass that up. So, I’ve been working on getting my AP-4 prepped and ready to go. I’ll go through all of that, as well as an AAR on the course once it’s complete.

That said there was a local guy who is also taking the course. He’s the employee of a friend of mine who runs a local gun store. He’s a young guy and has virtually no experience at all in sighting in his rifle using a scope so my friend asked me to give him a hand. I was more than happy to do so.

His rifle is a FNAR .308 with a Burris 4.5-14 scope and a bipod. I have no experience with this particular gun – in fact neither does the shooter – so we jumped in together. It is a magazine fed, piston driven weapon with an AR style grip and a 20” barrel with a 1:12 right-hand twist. We would literally be sending the very first rounds down range. 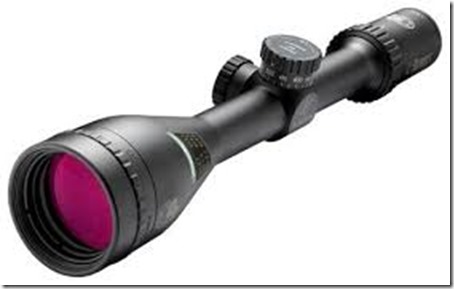 “Zeroing my gun” has become one of my pet peeves at my local range. Seems like every time I see a shooter at the bench and I ask him what task he had set himself/herself today . . . it’s “zeroing my gun”. Oh . . . and I’m starting at the 100yard bench . . . heavy sigh. So with this shooter I had a clean slate and someone truly willing to learn . . . the session was just plain fun!

I’ve completely jumped on the 10yard zero bandwagon. I’ve written about it when I used it for my backup .223 prior to my CFS carbine course in June. I’ve also used it a number of times since. For today’s session I used the same target I use for the .223 but added a hash mark approximately .86 inches below the POA. If you run the ballistics on a 150 grain .308 cartridge at 10 yards the bullet is .86 inches below a 100yard zero. So that was our starting point. Take a quick look at the image reflecting our initial efforts . . . holy crap what a piss poor start!!! The hits were so bad I covered the backer board with a SEB target so I’d have some idea where the hell the rounds were hitting . . . from only 10 yards away. Are you shittin’ me??? 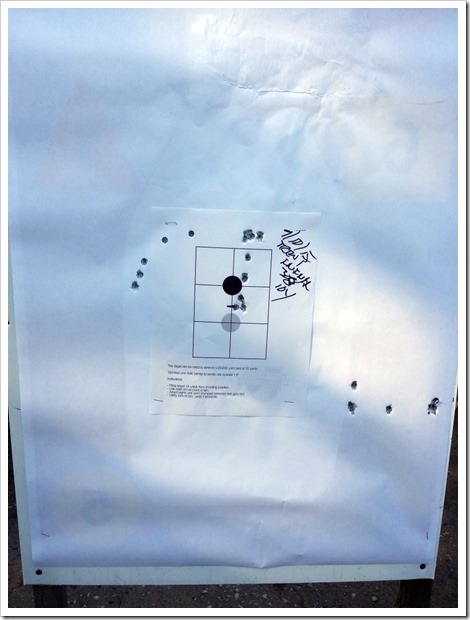 You can see the first group of rounds on the far right edge of the target. And, you can see the results of my crankin’ on the Windage and elevation as I walked it left . . . and up . . . and tried to get the damn thing down. WTF over?????? Finally I just STOPPED . . . and looked . . . as the shooter did as well. “Ya know, that scope just doesn’t look right.” he says. Sure enough, it does look cockeyed. A closer examination showed that the front mount for the scope was more than a little catawampus. So, into the tool kit and out with the torx set. I loosened the scope, reseated and tightened everything. 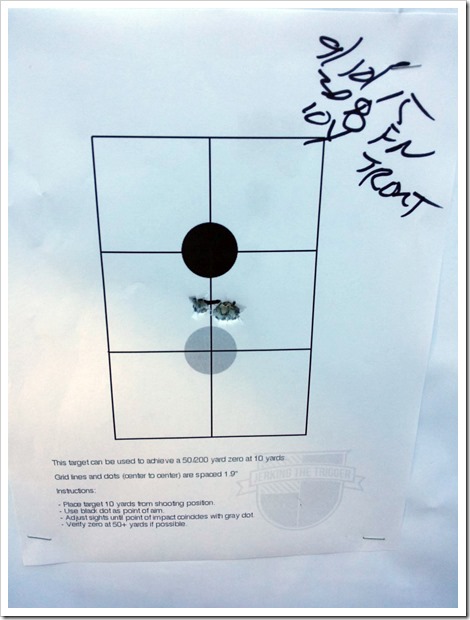 PRESTO!! We were back in the game. After about 6 rounds I changed targets and with another six we were pretty well shooting out the hash mark. Moral of the story . . . do now ASSUME your new gun has been set up properly . . . check it carefully from top to bottom.

Next we moved to the 100yard range. I posted 4 targets down range, set up my spotting scope and spent some time working on his position at the bench. 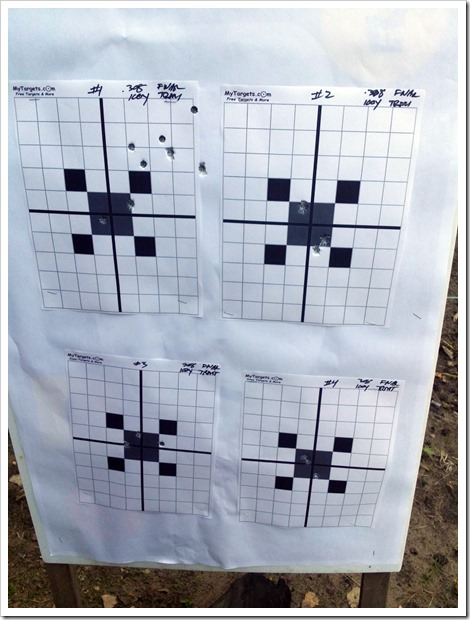 Butt of the stock pulled firmly into his shoulder, cheek welded behind the scope, rear bag under the butt of the stock for fine vertical adjustment. And we were ready to shoot. If you look at target #1 (top left) you will see the results. Our work at 10yards got us on paper with the first 3-round group high and right. Our first adjustment moved us pretty much on as far as Windage and our 3rd completed elevation with two of the three rounds painting just over a 1 MOA group center target. We made no more adjustments to the scope from this point on. Next we worked on the shooter.

Even shooting out to 100yards minute body movements can easily affect your shot. So we worked on things in stages. On targets 2 and 3 we focused on body position, bringing the weapon into his body, use of a rear shooting bag and trigger press. The improvement in shot placement is obvious with 2 of the 3 rounds it both cases being about 1 MOA. If you are working with a new distance shooter . . . there is no need to adjust the gun if you see results like this . . . it’s the shooter that’s throwing that 3rd shot. Next we worked on the final two components – breath management and follow through. I specifically use the work “management” because you CAN’T CONTROL YOUR BREATHING! You can work with it, you can be aware of it, you can manage it . . . but you can’t control it.

My preferred method is to “pause” for an additional second or two on the exhale part of my breathing cycle. I know some like to pause at the peak of breathing in. And a number of other options as well. I teach what I do, what can I say. So, for the 4th target we focused on bringing it all together. I kept up a running “reminder” conversation . . . position, use of the rear bag, good sight picture, smooth trigger press straight to the rear, follow through between each shot . . . his results were gratifying, two rounds touching and one just over one MOA away.

So, after the final three rounds it was a wrap . . . until we take the course in a couple weeks. A few final thoughts.

If you are starting something new and need a hand . . . ask. His comment was that if he’d come out by himself he would have probably started his zero process at 100yards. Since he couldn’t hit paper at 10yards, can you imagine what his frustration level would have been? Find a friend, find an instructor who can take a bit of time and share what they know with you.

Do not assume your new gun was fully prepped. A poorly mounted scope caused us to waste a dozen round or more . . . look things over really well before you send rounds down range.

There are dozens of bits and pieces that need to work well to place accurate shots at ranges of 100yards and beyond. Your shooting position. The use of a bipod and shooting bag instead of your muscles. Good equipment. Smooth trigger press. Good follow through. Breath management. And the patience and focus to do this over and over and over and over . . . It takes a bit of time and rounds down range to put this all together. You are not going to be a “shooter” after a single range trip, that simply is not going to happen.

But, with time and dedication and focus – you will be surprised how quickly groups will tighten.

As I said earlier . . . I do not see myself as a long range shooter . . . or even a 100yard shooter. But, after a couple weeks of real effort I gotta say it’s kinda cool! As for Trent . . . he’s going to spend some range time over the next week or so to polish things a bit. Then he’s going to join me and 6 other shooters and learn from a real expert. Our max distance will be 500yards . . . sounds like fun.