I had some thoughts on morning of 9/12/2001.  Amid cries of “Never Forget!!!” on each and every 9/11 since that date . . . while we haven’t forgotten . . . it is obvious we have learned little.  Pay particular attention to the first handful of paragraphs . . . any of this sound familiar in today’s discourse that is heard from the Whitehouse and on The Hill?  Lessons that remain unlearned are repeated . . .  just sayin’ . . . 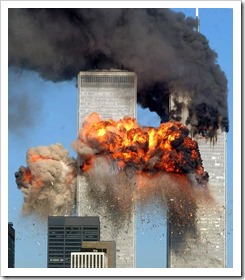 It is still hard to even begin to understand yesterday. And, as the dust begins to settle, there is talk about what we should do in response to this despicable act. I guess I would like to offer my two cents on that. By way of disclaimer, I should say I also write this while being incredibly angry. Obviously, anger with the people who conducted this attack, but also angry at us, as a nation, for allowing ourselves to become so weak.

For years and years, our government – populated by both Republicans and Democrats – has justified their way to spending less and less and less on those institutions that keep us free. Hardest hit has been the military and intelligence communities. Our soldiers live in poverty. Their housing, in many areas, is substandard. And, while Bush has promised “help is on the way”, their pay remains pathetic.

Our reduced spending (or spending on poorly run projects) has resulted in a military no longer able to fight a dual front war. Of course, this is OK since “no one” would ever think of attacking the US. This has resulted in a military no longer capable of mounting a campaign the size of the Gulf War. And, keep in mind, at that time it required HUNDREDS OF THOUSANDS of Guard and Reserve troops to pull that off because our military had been reduced to such a point of weakness the US military could not do it on their own without these backup troops. Today, even with these Guard and Reserve troops, we are NOT capable of mounting such a campaign.

This reduction in funding and personnel has resulted in the mass migration of mid level officers from service to country to service to corporation. Our defense, as a nation, depends on Captains and Majors throughout our armed services just as corporations actually run on the efforts of middle management. We are losing these folks in droves!

Our congress spends billions and billions on favored projects that help the people back home while ignoring this hemorrhage and the disgusting state of military life.

I am an unblushing hawk. I suppose that is obvious from the thoughts I have shared in the past as well as what I am saying while on my current soapbox. But, now, after thousands and thousands of deaths, maybe I will be heard at a deeper level.

As a hawk, I have a love of country that extends to my willingness to give my own life in defense of it. I do not mean that to be dramatic, it is a choice I consciously made years and years ago. It means that I believe we exist as the world’s largest democracy and as the world’s most open and free society because we have been willing (in times past anyway) to remain strong and to defend our interests at home and abroad. It means that US soldiers have a code of conduct that far exceeds that of many nations that governs what the exercise of military strength allows. (And, contrary to many talking heads I heard last night, it does not permit the carpet bombing of a country, even after what happened to us yesterday. Little Islamic children have moms and dads too!).

As a hawk, I still stand in awe of today’s soldiers that are willing to give their lives to defend our way of life.

The reason yesterday happened is that we, as a country, have agreed to the systematic and deliberate destruction of our nation’s ability to protect ourselves. Send troops to Afghanistan and hunt the bastard down: we can’t, our troops are stretched to the limit. Go to our spies and find out where “he” is: we can’t, our human intelligence capability has been shredded. Increase inspections of passenger’s bags: Geezz, the wait to get on planes is long enough!! My point is, WE, the NATION are responsible for allowing this to happen.

A final consideration. This is just the beginning. This proves to our enemies that we are weak and vulnerable. That we can be gotten to. It has carried us into a reality that much of the rest of the world has already had to accept. We are simply the news member of the “club” that has endured terrorism on their home soil. Terrorism’s purpose is to simply make you afraid. Let me ask this, will you ever get on a plane, go to the 60th floor of any building or look at the skyline of New York and not have a hair or two stand up on the back of your neck?? This attack was incredibly successful and cheap (at least to date) in human capital – around a dozen dedicated terrorists. There is more to come. We need to accept this and act accordingly.

Now, what should our response be? First, it must begin at home. We must realize that peace and freedom comes at a price. Fund the military (NOT the pork projects, the soldiers). Make the military a viable career for our young people. Take pride in the military so our children see a career of defending our country as viable and wonderful a choice as being a doctor. Insist that our Congress make a commitment that once again our military power will be sufficient enough to give anyone pause before they undertake such an action again. Insist that our Congress rebuild our intelligence community. The fact that such a complex operation could be mounted and carried out without our even having a glimpse that it was coming speaks volumes about our ability to gather information. That must change. And, finally, fund the missile shield. I continue to hear over and over that this method of attack is simply not practical and we need not defend against it. I simply disagree. There is any number of ways a “rogue” country could get a short range missile within launch range given time and money. This attack should make a fairly solid argument that those kinds of enemies do exist and are willing to take the time and spend the money to carry off just such an attack.

I am taking a lot of words to say that this was a lesson of the worst kind. I pray we have learned from it.

No fun today, simply prayers. May all the families who lost loved ones find family and friends to share their burdens today, to love and hold them while they deal with their horrible loss.