It’s April-ish, Susie and I are in line at Subway grabbing a quick lunch before she heads off to work. Randy and his wife walk in and get in line behind us. He’s a retired Marine and a police officer for a city to our south. We’ve talked a few times – mostly just hellos. I’d been looking for a training partner for the range and he keeps popping into my head so I ask him . . . “Randy, would you be interested in training together sometime? “ He pauses – “I’ll have to see how my shifts work out, give me a call.”

It’s the last day of September now (where the hell did Summer go???), and I see him pop up on Facebook last night. I drop a quick note . . . “Would you like to hit the range tomorrow?” The reply is pretty quick . . . phone number and a “Sure, call me when you want to head out, it’s my “weekend” “. And there we are – nearly 5 months later and we’re finally going to hit the range . . . damn, shoulda done this much earlier!!!

Yep, safety. As you grow as a shooter, as you push your limits . . . you . . . push your limits. At the very edge of your ability is failure. Failure is a good thing – it points out your weak points, leads you to solutions . . . but failure is also where true danger lurks as well. Pushing your draw stroke to the point of failure may end with a round in your thigh. Moving “off the x” at the edge of your limits may well end in a crash and burn with a loaded weapon in your hand. Bottom line, it’s nice to have a training partner to pull you butt outta the fire! Oh, and make damn sure your Blow Out Kit is right on the firing line with you!!

You make mistakes. As the shooter it can be impossible for you to see problems, and an extra set of eyes are a great tool to move your skillset forward. That said, it helps a great deal if the eyes are knowledgeable, that they can spot what’s off and can help you diagnose your issue and help you fix it.

Like I said, I’ve got a number of audio drill files loaded on my smartphone. And, I have a Bluetooth ear piece that fits nicely under my “ears”. I can bring up the file, press play, drop the phone in my pocket and simply run the drills. But . . . I built the drills . . . and after a few runs through, I know what’s coming. With a training partner we can call the drill as we go. We can increase speed . . . slow it down . . . vary it . . . essentially call whatever we want. And variety will stretch you as a shooter, help you grow and make you better.

I got to the range a bit early, set up the targets, loaded up three magazines and waited for Randy to come. Marine . . . agreed on time . . . and he showed up on the dot . . . why am I not surprised.

When you head out to the range – have a plan. Don’t just make holes – practice with purpose. So, we chatted and asked him what he usually worked on when he went to the range. He confirmed what I have known, but it’s still surprising to me . . . police officers spend very little time on the range. He has to qualify twice a year, they get 100 rounds for practice and then shoot the qualification course. He and his fellow officers are not provided any training ammunition at all and range time outside of qualification is simply “on them”. I knew that . . . but it was still disappointing that officers in our area get so little support.

We chatted about what we wanted to work on. I typically do “balance of speed and precision” drills. “UP” – multi round engagement center mass. A called number – a single round on the shape with that number in it. A shape and side – single round to that shape. Simple calling out a shape – a round to each of the shapes, one on each side of the target. Each draw is from concealment, three magazines loaded with 4-6 rounds to insure reloads. The engagement ends with a detailed scan and assess followed by a holstering my weapon . . . REMEMBER, YOU HAVE ALL THE TIME IN THE WORLD TO REHOLSTER.

Since we’d not trained together, he has no idea whether I can shoot or not and I don’t know how he’s going to react to the drills, we just followed the above formula. I gotta say . . . it was a great hour-plus on the range. After the start-up dust was knocked off – we both smoothed out and got some good work done! 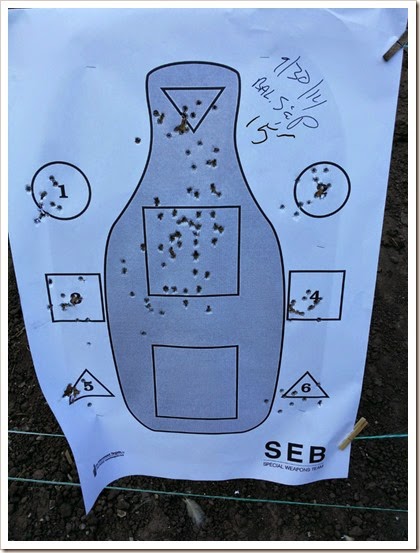 As we picked up and packed up I asked if he was interested in doing it again. A “Yep!” quickly followed. Of course, it’s fast approaching our fall rainy season and winter . . . I asked him how he felt about training in the rain. The “Marine” smiled back . . . “Been wet before Bill!”

It’s gonna be a fun fall and winter!