This past weekend was the “Spooktacular” at the scout camp. Its focus was an afternoon of fun for Cub Scouts and their friends . . . and to provide an opportunity for prospective Cubs to see some of the fun they can have if the join the scouting ranks.

There were a number of shooting sports represented – an “Active Slingshot” walk – tin pie plates attached to trees and bushes that the Cubs shot at with large dog food “ammunition”, an archery range and . . . the BB gun range.

It’s amazing the draw the BB gun range has for young kids – both boys and girls. At events like this, at day camps and cub scout events it is THE place they all want to make sure they pass through . . . multiple times if possible!

We set up 24 shooting benches and through the 5 scheduled 30 minute shooting sessions, we filled all 24 benches. We then had a 2 hour period of “open shoot” which typically saw around 1/3 of the benches full.

Our process is pretty simple really, and it focuses on both OUR main concern – SAFTEY . . . and THEIR main concern – THEY WANT TO SHOOT . . . LOTS!!! We conduct about a 5-7 minute safety brief – we cover the 3 primary NRA rules, cover sighting the BB gun, loading, cocking and the use of the safety. We make sure that Cub and parent get the briefing and then send them to their benches. The first round we do on command only – loading, cocking, shouldering and sighting, taking the safety off and shooting. After that we have parents help their Cub while our team walks the line answering any questions, helping them with their bench rest position and providing lots of “high fives”, back slaps, cheers, words of encouragement and – in general – making sure the cubs, parents, friends and a family are having a SAFE and good time.

But . . . below that . . . if you make a little effort . . . you can get real work done as well. Good, foundational work that the Cub will be able to use as they move through the ranks. And, you can open the eyes of many parents to the fact that then can share a shooting sport with their cub in the back yard, the basement or garage for not a lot of money. And that’s what I want to focus on in this post . . . the work you can get done with a $40 (or less) Daisy Red Ryder BB gun and a very new, young shooter.

Remember, they have their goal . . . THEY WANT TO SHOOT . . . LOTS!!! And you want them to as well, but safely. Once they realize that as long as they follow “the big three” safety rules, they’re going to be able to shoot . . . the door opens for the adult to get training done on all the other components of fire arms training – from nomenclature to shooting positions . . . AS LONG AS THE YOUNG SHOOTER CAN SHOOT!! 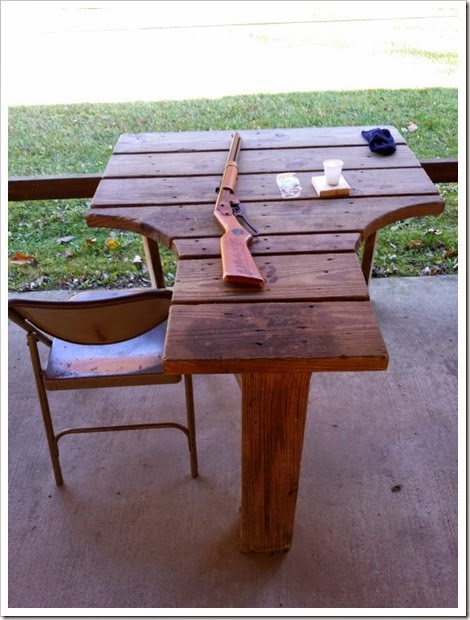 So let’s look at the BB Gun as you would a traditional lever action rifle and see what they have in common. Each rifle has a:

Let’s compare the shooting process. With each rifle you:

Load ammunition into the magazine, cock the rifle to load a new round, mount the rifle to your shoulder with three solid points of contact, you get proper sight alignment and sight picture, you take the safety off and gently press the trigger to the rear.

The differences? One rifle can cost anywhere from $.06 per round to a couple dollars per round and sent that high velocity round well over a mile down range with enough energy to kill whatever it hits. To shoot it safely you need a clear range, solid backstop and good eye/ear protection. For indoor shooting it become much more complicated from the berm to the air handling system – and is typically limited to commercial shooting ranges that charge for membership as well as time in a lane. Let’s just say shooting a standard rifle is complicated.

So, for Cub – or just young shooter – and trainer/parent – what’s the real purpose of range time? First – FUN!!! If the shooter doesn’t have fun, they’ll not shoot – period. And you have to want to shoot to learn to do it well.

Next, safety. The instructor/parent must make the creation of a safe shooter the primary goal! I can move a young shooter from being a safe – and crappy shot to a safe and good shooter over a couple of reasonable range days. However, a young shooter who cares little for basic safety – that’s a problem – for all of us. Insist on safety, correct consistently and constantly, expect perfection. After a very short time – they’ll respond and will integrate the RULES into their range time. That doesn’t mean they may not let their excitement over ride their brain . . . they’re kids. But the struggle diminishes and good habits build quickly.

Nomenclature is part of the “language of the gun”. You load through the loading gate, you align the rear sight with the front blade, they get good sight alignment and a solid sight picture, they firmly press the trigger, they follow through after the shot, they mount their rifle and have three solid points of contact . . . sound familiar? If you are training a new shooter, and the rifle they are using happens to be a BB gun – don’t change your words because it “isn’t a real gun” . . . if it “looks like a duck, sounds like a duck walks like a duck” . . . it’s probably a duck. Take advantage of that and use the right words to train your new shooters on everything from proper safety to how to mount the rifle to proper sight alignment/sight picture. And use the right words . . . their next trainer will thank you.

Yeah, yeah . . . I get it . . . but can they hit anything with just a BB gun? You bet, but remember muzzle velocity is only 350 fps, it was never designed to be a long range firearm. The recommended distance for a Daisy Red Ryder is 5m – just a tad over 16ft. For the shooter what that means is that if they do a halfway decent job of sight alignment/sight picture, they’re going to makes holes in the paper . . . and trust me, THAT’S what they want to see . . . holes in the paper. Real accuracy comes later, but putting a hole in a target – anywhere on the target – is a WIN!!!

As for real accuracy – limited to the Daisy Red Ryder – and considering we had put the target line at more like 25 feet rather than 16ft, I was still able to shoot a 3” group “cold”. I’ll take it. 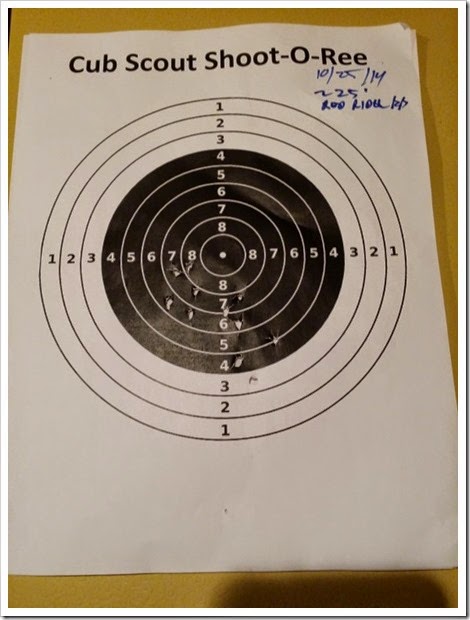 Bottom line . . . don’t overlook the use of a BB gun as a training gun for a new shooter just because it’s “not a real gun”. You can get tons of real work done with the lowely Daisy Red Ryder . . .

Posted by eiaftinfo at 9:36 AM