Training – Drills . . . they serve a purpose

So I check into one of the training groups a few days ago and there’s an on-going “discussion” going on between one trainer who has posted a video of a “transition drill” and a number of other trainers trying to figure out what the  purpose of the drill was. The stated purpose was to demonstrate how to make a transition from a primary defensive weapon that was a long-gun that had run dry to a tertiary defensive weapon – the trainer’s handgun. Only it didn’t really demonstrate that. Because in the first couple runs, the long-gun wasn’t dry. Because after the “drill” was finished – signified by a draw and single round engagement – the handgun was quickly reholstered . . . immediately . . . without a scan and assess . . . and seemingly while turned directly towards the cameraman. In fact, the focus of the on-camera discussion focused much more on the speed that the trainer ran the drill than on actually learning the proper mechanics of such a transition drill.

It got me thinking . . . how many times do we see the same thing on a training range? The shooter “does a drill” – or multiple drills – yet in retrospect, when they are played back in our mind’s eye – they seem to be incomplete. Perhaps that’s for one simple reason . . . they are.

So let’s chat a bit about what goes into building a “drill” . . . from start to finish.

It should make us think

My intent is to train “thinking shooters”. While there are occasions that parts of our communities look like the wild west, you do not have the luxury of just blasting away at a perceived threat without considering where your rounds might go should you miss.

You must clearly identify the threat, evaluate your ability to engage, decide whether you should even engage or whether it’s smarter to leave as quickly as possible . . . and . . . if you do engage, you need to be confident in your ability to “make the shot” and . . . you actually need to make it.

It should be “reality based”

While the example above – a transition drill – is certainly something that happens in real life . . . it happens when the primary weapon runs dry or has a hard malfunction and is no longer functional. A shooter doesn’t just “decide” to switch from primary to tertiary on a whim. A more reasonable way to simulate such an event would have been to load a magazine with 1 or 2 rounds, run the gun dry and then switch. That would have simulated a transition drill much more accurately.

Yes . . . I understand that timers have their place. They increase stress. They measure performance. They compare shooter’s performance in competitions. They look cool on video, especially if you have a great run. And they can push you way past your current level of skill – just to look cool on the tape. That said, I do use a timer from time to time – but I use it to simply start a drill and sound a preferred par time.

As the trainer mentioned above responded to some of the questions asked by fellow trainers, he got just a tad defensive. His fallback argument finally settled on . . . “let’s see your damn video” . . . I make use of video from a couple points of view. I typically train alone and it is my only way to watch my performance . . . and find the dozens of little things I hammer myself on. And, it’s the only way I can share those mistakes – and successes – with folks that pass through the blog. And learning from my mistakes is one other way I can pass information on the “new and inexperienced shooter”.

So what would a “drill” . . . a complete drill look like? All In My Not So Humble Opinion anyway. Well let’s pick one – one that I have some video on that has the good, the bad and the ugly in it. How about a simple draw and engagement with some precision shots required throughout the 6 minute or so video you’ll get the idea of what I mean. But, look for the key points . . .

Repeat this process until the drill set is complete – in this case I stop after I’ve run through two 15-round magazines. Oh, and stick around for the mag change . . . it’s a real treat!! Heavy sigh.

This is a “drill” I can justify and explain. It simulates a multi-round engagement on a threat. It incorporates a startle response and movement. It forces me to perform precision shots. It makes me do a speed reload (ok, honestly, watch the tape . . . and stop laughing). It provides me the ability to train my physical actions as well as learn from my mistakes. And, in sharing with “new and inexperienced shooters” it allows me to teach . . . from the composition of the drill, the flow of the drill, the things that went well and also from those that didn’t go very well at all.

So we all become better, more proficient and more lethal shooters? 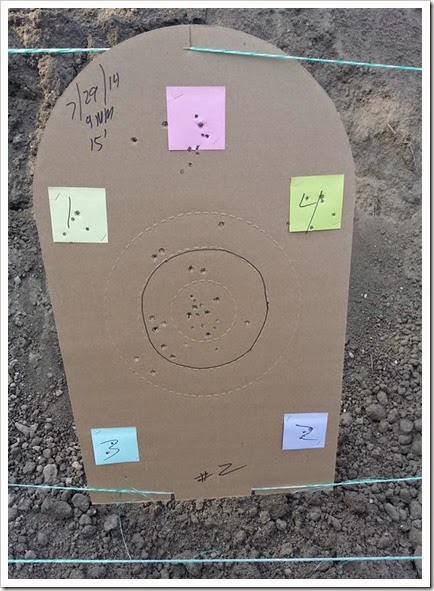