Well the short answer is something like . . . “If you could pick up just one firearm as you were going out the door – a firearm that can do everything from defending your family to putting food on the table – what would it look like?

Over history these were the trail blazers, the person that went first, evaluated what was coming and informed those that were following him just what to expect.  What kind of firearm would a scout use?

And in military organizations these were people who spent most of their time in the field, evaluating the enemy, evaluating the route that was being taken.  They could be operating in virtually any type of terrain, for long periods of time and may well need to act decisively to defend themselves should the need arise.  What kind of firearm would a military scout use?

In the early 1990 Lt. Col. Jeff Cooper took up the task of bringing such a firearm to life.  It was one of his passions for the remainder of his life.  In general, it had several characteristics:

So why did I go in search of one??  Honestly, I’m not a “gun guy” in that I purchase a firearm for a purpose and not because of the “coolness factor” or as an item for a collection.  I had a specific purpose to look for a Scout rifle.  During a conversation with a fellow trainer I was asked if I thought I could put together a “Designated Marksman” set of coursework.  My response was . . . sure, depending on what you mean by the words “Designated Marksman”.  In this particular case it meant coursework for a small core of officers that would be able to respond quickly with a firearm that was a larger caliber than a handgun or the typical 5.56 patrol rifle that had more stopping power.

The Designated Marksman fits – at least in law enforcement IMHO – between the patrol officer that is trained on a patrol carbine and a SWAT Sniper.  The job was recently demonstrated to me by a video of an officer intervening in the taking of a child from a car.  The officer  exited his vehicle, took a supported position behind the squad’s door with the window down and quickly and accurately engaged the threat, ran to and rescued the child and took them to safety.  Quick, smooth and decisive.  It implied much about the training of the officer and his ability to respond with his patrol rifle.

The SWAT sniper is typically trained for a much broader range of tasks and at greater distances.  The reality though is that per a 2005 study of 897 law enforcement SWAT sniper engagements over a 20-year period the average range of engagement was 51 yards.  The typical round used was a .308 with a 168-grain Match King bullet.  The longest engagement that was documented was 187 yards.

Given this data, could a Scout Rifle with Cooper’s designated specifications provide a viable option for officers tasked with the assignment of Designated Marksman?  Answering that question became my reasoning for the purchase of a “Scout Rifle” that closely matched Lt. Col. Cooper’s specifications.

During my research I narrowed my search to two versions – the Ruger Gunsite Scout Rifle and the Savage 110 Scout Rifle.  Availability made my decision for me.  After months of finding empty shelves across the country a friend of mine who owns a gun store in Texas found a fellow dealer who has a single solitary Savage 110 Scout Rifle in .308 in stock . . . SOLD!!!

Of course there is always “furniture” that goes with this kind of purchase regardless of which rifle I purchased.
My scope of choice was the Vortex Crossfire II 2-7x32 Scout scope.  What sets it apart from traditional scopes is its long eye relief – nearly 10 inches.  Contrary to Cooper’s standard it is not fixed but provides a smooth transition from 2 to 7 power.  It has a simple V-Plex reticle. 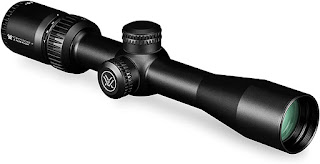 To mount the scope, I used Vortex’s Pro Series Rings in MEDIUM height . . . and that’s important . . . medium height.  To tighten the rings to the scope and the picatinny rail I used a Wheeler Firearms Accurizing Torque Wrench.  16 inch/pounds on the scope mount side and 30 inch/pounds on the rail side.  It’s worth it to purchase this type of wrench to ensure that you scope is securely mounted.  I’ve just seen a bunch of folks that zero their gun only to discover that their mount is loose at some point.  Spend the money, do it right. 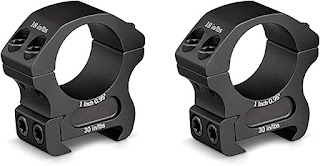 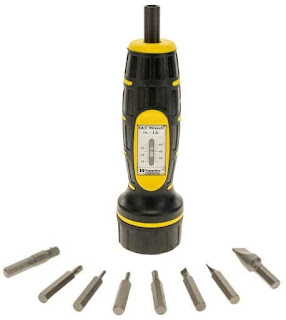 For a sling I am very fond of Larry Vickers slings.  His quick adjust slings just can not be beat.  He has a couple different configurations but for this rifle I chose the Viking Tactics VATC 2 point sling.  This allows for a quick adjustment to tighten it to your body should you need to transition to your sidearm. 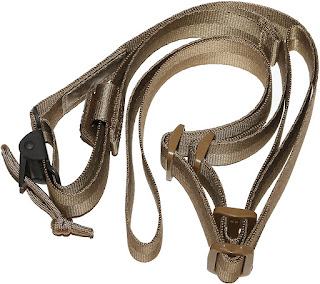 The swivels I used to attach the sling to the sling points were a pair of Braudel 1.25 Tri-Lock Sling Swivels.  On an important note, make sure you use some BLUE LocTite on the threads.  If you don’t, I absolutely promise they will come loose, and you will find yourself with one end of the sling swinging in the air. 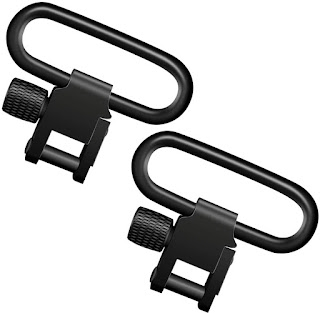 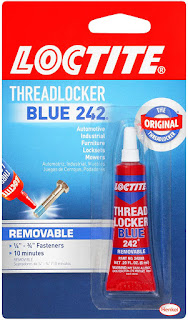 Let’s see how the Savage 110 Scout Rifle matches up with Cooper’s desires.

We’ll chat about the accuracy in a bit.  We meet the specifications with the exception of weight – we blew that by nearly 2 pounds on the high side.  And, what I found was that none . . . absolutely none of the “Scout Rifles” met them all.  Lt. Col. Cooper never found one that fully met all his expectations – even the one developed for him, with him by Steyer.  Such is life, compromise is all things.

The Savage 110 Scout has a couple of very nice features – an adjustable Comb on the stock and an adjustable length of pull via butt plate inserts.  Both are easily installed.  For me I left it as is out of the box.  These are known as their AccuFit and AccuStock feature.

It also comes with a 10 round AICS-style detachable box magazine.

It comes with the Savage AccuTrigger that is adjustable from 2.5# to 6#.  The pull weight measured 3.5# out of the box and I have left it there.

A Williams rear sight is provided giving the shooter either a small diameter hole as a peep site or a larger diameter opening providing a rear ghost ring.  The rear sight is adjustable for windage and elevation.  The front site is a crisp center post with protective wings on either side.

A large and effective flash hider is mounted via 5/8x24# threaded muzzle making it suppressor ready.  The design also offered a fair amount of recoil relief as well. 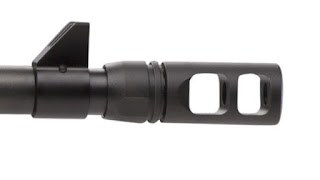 Zeroing the Savage 110 Scout proved fairly simple.  I am fond of an initial 10y zero.  I bagged the Scout with Armageddon Gear’s “Game Changer” in the front and a small bag in the back.  The round I was shooting was a PMC 147gr X-TAC .  BC 0.402  2800 fps.  Running it through the JBM ballistics calculator the drop at 10 yards for a 200 yard zero is right at 1 inch.  When doing a 200 yard zero on a 100 yard range with this specific cartridge, the scope needs to be adjusted to impact 1.9 inches high on the target. 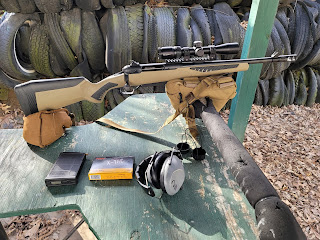 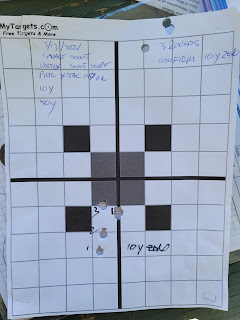 Pushing out to 100 yards I polished the zero and then shot two more rounds of 5 each to confirm.  At this point I called the Scout 110 “zeroed”.

I shot a final box of 20 rounds on 5 targets, each 3” in diameter, 4 rounds per target.  These were my “official” evaluation rounds to see how well the Scout 110 was shooting.  The average group size was right at 2.5” – which I’ll lay in my lap.  I expect that once I am more comfortable with the gun and the scope, these groups will tighten up.  That said, the gun is rated as a 2MOA firearm.  Other evaluations I read, depending on the ammunition they were using, ran around 1.5”.  So I’ll take what I got and then work on my mechanics as well as finding a load that will shoot better. 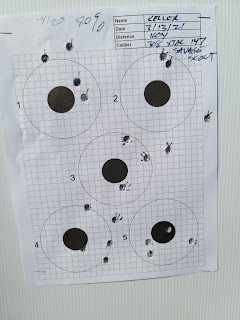 Just a quick though on accuracy and precision.  Precision revolves around small, consistent sized groups.  Accuracy revolves around putting those groups where you want them.  Being able to be precise and accurate is dependent on the gun, the shooter and a very consistent round.  The most commonly used sniper cartridge is the 168 grain match grade round.  Regardless of the round, it is incumbent on a Designated Marksman to fully understand how his/her weapon responds to the specific cartridge and bullet weight.  That chosen round, and that chosen round alone is what the shooter should practice with.  I’ll do another post addressing the mechanics of actually shooting which I consider to be essentially the same regardless the rifle or round.

So, to sum things up, I’m pleased with the performance the Scout 110 so far.  I’ve not sent near enough rounds down range yet, but first blush it’s very promising as a solid choice for a DM role in the law enforcement community.  I’ll have more thoughts by the end of the summer.

Comments and questions are always welcome, just leave them below.

A History Of The Steyr Scout

Posted by eiaftinfo at 3:48 PM