There are many things that, in my mind, I NEED . . . another gun really isn’t on the list.  Yet, there it was, in the case sitting atop its box.  A brand-new Ruger Wrangler .22LR pistol.

“WALK AWAY!!!  WALK AWAY!!!”  My mind yelled . . . as I filled out the paperwork and passed across my legal tender . . . going out the door the proud owner of what has quickly become one of Ruger’s most popular firearms, the Wrangler. 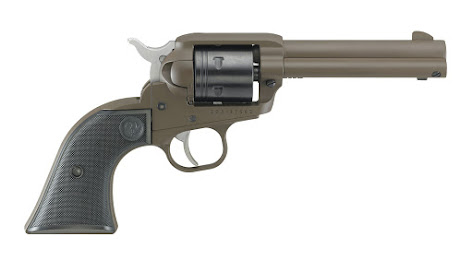 Its specs are solid and listed below.  It’s fit in my hand was very comfortable and satisfying.  And it’s suggested  MSRP of $249 puts it within the range of virtually anyone.  The pricing I am seeing in stores in my area is right at $200.

If you compare the finish of the Wrangler to Ruger’s Single Six you’ll notice that rather than a polished and blued frame the frame of the Wrangler - as well as the barrel -  has a Cerakote finish and is made of and aluminum alloy.  This reduces weight as well as cost.  That said, the cylinder and the cold-hammer forged barrel are still made from a carbon steel alloy ensuring the Wrangler’s accuracy and durability.

A transfer bar safety and a loading gate interlock ensures a high degree of safety if the Wrangler is dropped and does not allow the hammer to be cocked if the loading gate is open.

The Checkered grips provides a great surface that provides a solid surface for a reliable grip on the Wrangler.

There are no adjustable sights.  The rear sight is a groove milled down the top of the frame and the front sight is a simple blade.  The surface of the milled groove and the front sight are the same color and that made picking up a solid “sight alignment” and “sight picture” difficult for me.  It became easier as I worked through my range session simply because I became used to the firearm – but it took real focus to pick them both up.  I’ll see how that goes as time goes on.

Loading was simple and easy though the fit of the cartridge was snug.  When ejecting spent casings, the ejector rod was necessary for each chamber.  In one chamber for one round, I had to tap on the rod a bit with my Leatherman Juicer to dislodge the casing.  In looking at the casing it was a bit deformed along a part of the rim.  No idea why and it was not repeated during this session.

The size of the Wrangler is the same as the Single Six so the same holsters can be used.  For me I purchased a DeSantis “Wild Hog” holster and am very happy with the fit.

So how does this little fella do on accuracy??? 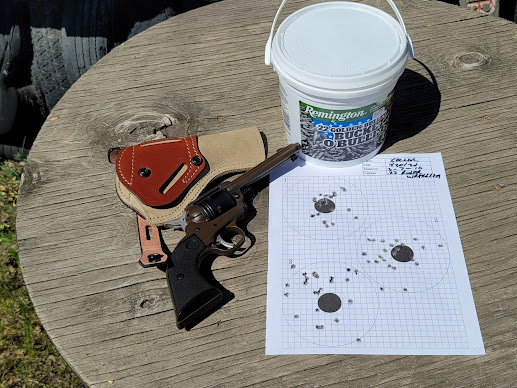 So where does this SA pistol fit in the scheme of things??  I would put it solidly in the “plinker” category.  I don’t believe there would be real value in it for hunting small game – say squirrels or rabbits.  I do not see it as a defensive firearm either though as the saying goes . . . “Any gun is better than no gun!”.  But, if you just want something to plink with – steel, cans, different target shapes, spinners, blocks across the ground – I think the Wrangler fills that square just fine.  In fact, I had originally though I’d just run one cylinder on each target.  But the darn thing was just so much fun to shoot I ended up running 4 on each target.

It’s a fun and satisfying pistol to shoot.  If you’re looking for just such a handgun, I will gladly point you towards the Ruger Wrangler .22LR