The reality for the vast majority of “Concealed Carry Instructors” or “Defensive Pistol Instructors” or whatever we choose to call ourselves is that we typically get an individual who wishes to obtain a “Concealed Weapon Permit” (your particular state may choose to call it something else) once – and only once.  And most of these are looking for the cheapest possible course out there.  That is a simple truth.


Honestly – for those looking for the cheapest route – the on-line quickie, the 4-hour quickie . . . or those living in a Constitutional Carry state that have no interest in any type of coursework – they are many times just a lost cause for an instructor.  They are not going to look for coursework and we are not going to see them in our classes.


But that new or inexperienced shooter that is looking for real information to teach them about various handguns, to inform them about various legal aspects, to help them choose belts, holsters, range gear and their defensive firearm . . . these folks will come, invest a day (sometimes more) and their hard earned money with an instructor who offers such coursework.  The chances are though that even these folks will limit themselves to a single course . . . and that course should do a solid job of introducing that new or inexperienced shooter to a solid set of fundamentals before they reach the end of the day.  And that is exactly what the N.A.P.S.I. Foundations of Defensive Pistol Course does.


So this past Saturday saw me in a classroom with 9 such folks, 4 women and 5 men and all new shooters.  Some brought old family handguns, some had handguns but virtually no formal training at all and one woman had recently purchased a new LC9S.  For those without firearms I rent them a Ruger 22/45 for the range work.


Because of the size of the class and their inexperience I asked for help on the range.  Annette Chapman – owner of Pistol Prep Academy located in Atlanta, Illinois and a certified NAPSI instructor – answered the call, drove 4 hours and dived in for the day.  And, Melody Lauer, a Rangemaster instructor and newly minted Director of Training for Ballistic Radio also raised her hand and made the 90-minute drive to lend a hand.  Both of these women have years of experience both in the classroom and on the range, it was great to have them for the day.  We jelled nicely as a teaching team and while I fully admit my big mouth probably took up most of the time, everyone “threw in a nickel” when they felt they needed to.  Their eyes and suggestions were invaluable on the range helping the shooters on the line make corrections with their grip, finger placement on the trigger, sight alignment, sight picture, working on their stance . . . all the little things that need to be worked on for the new shooter to have a successful range trip.  Just want to take a line and say thank you for coming to lend a hand.


The three N.A.P.S.I. courses being currently being taught are the result of a couple years of development including having it presented to other instructors, experienced shooters and brand new shooters for review and evaluation.  It’s “mature” in that it’s in its first release cycle.  It will be reviewed each fall with updates made should they be deemed necessary the beginning of each year.  The Fundamentals of Defensive Pistol is the first in the series.


Holsters, Belts and Off Body was covered next.  We talked about various types of holsters, their purpose and the material they were typically made of.  This is an area where new shooters typically “choose poorly” the first time out.  With a little knowledge and forethought, much better choices can be made.


Next up was a discussion of Ammunition – it’s components, various types and their purposes as well as considerations each shooter must think about when they send a range “down range”.


Handgun cleaning, safety rules and range safety and commands, loading and loading of the different pistol types and magazines finished out the presentation part of the classroom.


We then moved into the Introduction to Defensive Shooting portion.  This covered some thoughts on how your body responds when it’s presented with something totally unexpected, determining their dominant eye, aimed fire and other alternatives, trigger press and follow through, situational awareness and mindset.


Defensive use of a firearm brings up unique areas of consideration – use of force, use of deadly force, defining why the threat had the Ability to harm you, the Opportunity to harm you, why you – the shooter – felt you were in immediate Jeopardy and that you had to use deadly force to the Preclusion of every other alternatives.  Add to that Disparity of Force and there is a lot of ground to cover.


We left our seats and headed to the SIRT range I had set up in the rear of the classroom.  I use this to wring out range commands, get folks used to picking up a handgun and then beginning to work on the fundamentals of stance, grip, sight alignment, sight picture, trigger press and follow through.  My past experience has been that 30 minutes spent here will save hours on the range.  With 9 shooters we built a flight of 5 and a flight of 4 to run through the range work.  The flights we built for the SIRT range carried through to the live fire range.


After lunch came the live fire range.  I use a D-1-ish target that fills many squares for the coursework I teach.  The distance was 15’.  As I’ve been sharing for the last couple range reviews . . . “global warming” has been tough on range work this year though things had truly warmed up and we were in the mid 30s – not bad.  Everyone had dressed for the day and everyone seemed to stay reasonably comfortable throughout the while trip. 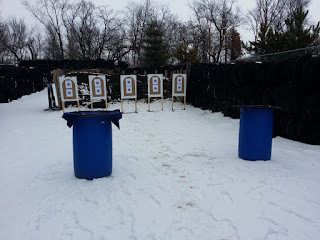 We began with drills where were single round only and fully by command.  And, we ended the learning portion with accelerated pairs on the “UP!” command.  Once this portion was finished everyone shot a 20 round qualification course with accelerated pairs.  Smiles were seen across the board when the range work was finished.  I hope it was because of what they had accomplished on the range rather that it being the thought of returning to the classroom and its warmth.


A final written exam, a short – “So what did you think?” – feedback session and passing out certificates of completion ended the day.  Started at 8AM and had everyone out the door by 5:45PM.   Pretty satisfying day.


So there it is . . . good job folks and, again, many thanks to Annette and Melody for their hand both in the classroom and on the range.  I appreciate it!