Senator Charles Grassley of Iowa has a personal policy of visiting all 99 counties within the state at least once a year.  Last night – February 16, 2016 – was our turn for the year.  I found the evening disheartening.


The Town Hall’s meeting room was packed with standing room only.  As you can see from the photo pretty much every inch was used up. 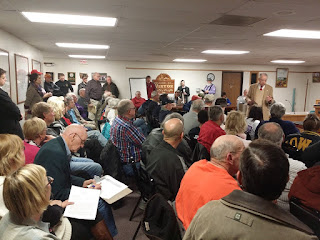 The meeting occurred within days of Justice Scalia’s death so the nomination and approval process took center stage.  Since Sen. Grassley chairs the Senate’s Judiciary Committee he will play a significant role in the proceedings.


To his great credit he didn’t let things bog down – instead he went around the room, took down 10 topics and then went through the list top to bottom.  Topics included the appointment of Justice Scalia’s successor, allowing adopted children to contact siblings, taxation of “Cadillac Plans”, rising cost of insurance, rising cost of prescription medication, reduced COLA for social security recipients, the unfairness of minimum sentencing from judge to judge, an end to out of control government spending . . . as well as a few others I simply can’t remember.


It is at about this point that you begin to realize how small an individual’s voice truly is.  And, it was also apparent just how willingly dependent we, as a nation, have become on the local, state and federal governments.  It was disheartening and disturbing.


The driving desire on the part of those folks who were obviously members of the Democrat party was to approve President Obama’s nominee TOMORROW!  Sooner if possible.  The Constitution was bandied about over and over forgetting that the Senate has an Advise and Consent duty.  The Senator smiled and said that no one has asked his advice on a nominee since the 80s and that he and his fellow Senators take their responsibility of consent seriously.  He sees no way that this president will have a nominee approved and sees it as one of the first duties of the incoming President.  Time will tell as to whether the Republicans stand fast against what will no doubt be a tidal wave of criticism.  I pray they remain strong.  I’ve been sorely disappointed with this particular batch of congressional Republicans as recently as October and hope they find a spine.


The cry for more funding for Social Security, for help with pharmaceutical costs, for those on fixed or limited incomes, for lower health care costs, lower insurance costs was loud and demanding.  The simple answer seemed to be to simply take it from taxes.  There seemed to be little understanding of exactly how we got here in the first place.  Much can be laid at the foot of the Affordable Care Act.  It had a 40% insurance rate increase built into its structure.  Folks were clearly told that rates would go up, the cost of pharmaceuticals would increase, hospital costs would rise, insurance costs would rise . . . the information was there.  The rub was that it was coming from the “wrong side of the aisle”.  The President’s promises of “you can keep your doctors”, “your insurance rates will go down by $2,500 per person” along with dozens of other promises were much easier on the ears so warnings went unheeded.  And here we are – with health insurance in chaos, rising costs as far as the eye can see . . . and now the cry of “SINGLE PAYER” has begun its rise.  We do have a national example of how single payer would work . . . it’s called the VA.  Our best and bravest dying on waiting lists, being left unattended and given care typical of 2nd world countries.  While the assurances that things would be better under single payer system are said over and over – there is virtually nothing to point to that would indicate that anything would get better and much to show things would get worse.  You want improvement – release health insurance to the market place.  Let it be sold across state lines.  Let someone create the GEICO of the health insurance world.  Competition will drives the prices down, and competition alone.


One other lesson seemingly lost on many in the group is that the Government has no money . . . they create nothing . . . they sell nothing . . . they simply take what they want.  Let me say that one more time . . . They take what they want . . . from us.  Of 163 countries the US ranks number 3 in corporate tax rates at 39.1%.  Third highest in the world.  And we wonder why corporations are leaving and no other countries are investing here.  Add to that a combined top individual tax rate approaching 49% - the government does a great deal to simply remove capital from the market place that could be used to grow business and expand the number of jobs.  The reality is that as the government takes more and more of the free capital available, companies will become smaller, fewer jobs will be available ultimately resulting is less money available for the federal government . . . which will only drive the amounts they take higher.  There will be an “end point” . . . we can see it in Venezuela even as I type this post.


Another disheartening part of the evening was just listening to the grumbles of folks that fully expect the federal government to take care of them . . . as individuals.  It was never built to do that.  It will never be able to meet their expectations.  As I kid I grew up “pre-Great Society”.  When my father died family help us, friends helped us, my mom taught herself what she needed to know to get a better job.  Kennedy lit a nation on fire with “Ask not what your country can do for you, but what you can do for your country!”  He lowered taxes, sent men into space and created the space for the most massive growth spurt our nation has ever seen.  At the meeting I saw a nation with their hands out.  The cry seems to have become “We want mo’ money!!”  Gone was self-reliance and in its place was dependence on a government mired in petty politics and the raw desire for power.  How anyone can believe that they are the answer, that they are the solution, that they are the only hope . . . it nearly breaks my heart.


Look in the mirror.


The sooner we eliminate our dependence on Uncle Sam, roll up our sleeves and get to it – the better off we will all be.


My thanks for the good Senator’s time.  I am truly appreciative for all your hard work.  That said, I would like to see you all do less, spend less and do your very best to stay out of our lives.

Posted by eiaftinfo at 8:22 PM