The majority of “gunnies” that I know are well past the point of being just “gun owners”, or “gun enthusiasts”, or “gun aficionados” . . . they have moved well into the category of full blown “gun geek”. And, as is the tradition with most folks this level of “enthusiasm” . . . they love to “tweak” there guns and their gear.

The discussions enter the arena of the “microscopic” detail about – first and foremost – the “BEST” gun.  And then comes the “BEST” sights, “BEST” trigger, “BEST” grip, “BEST” magazine release, “BEST” safety . . . pick a component or a subsystem on your firearm . . . and these folks will be more than happy to tell you what the “BEST” components are, the “real” reasons why that’s true and who makes that specific item.

Expand the discussion to caliber and type of ammunition . . . well . . . God help ya! Lay in some snacks, crack open a cold one, find a comfy chair . . . cause you’re going to be an ear full!

Add to this discussions on modes of carry, holsters, mag carriers, belts, “ears”, “eyes” . . . and a host of other “shootie type things” . . . it can get real deep real fast.

Let’s just stick to the gun . . . in fact, let’s just stick to your defensive carry handgun. The gun you depend on to protect yourself, your family or anyone else in your charge. Why?? Because this is where the “rubber meets the road”. If this firearm fails to do its job properly . . . your day will end badly.

My general advice on “aftermarket” modifications – components that actually replace original factory components – it to simply be careful with your choice. Some components may well have consequences down the road – while others may well help you defend your life.

Sights are probably one of the most frequently changed components. Their purpose, of course, is to allow you to accurately place rounds on a threat. Honestly, within the range that +86% of all defensive shootings occur – you will never have time to use them. Yet, at distance and with time – there is value in finding a combination of front and rear sight that will work well for you. Do your homework, read the reviews of various combinations, try different setups on your friends guns. Just remember what your defensive handgun is for – it’s not for “Bulls Eye” shooting but rather engaging a threat at far closer range.  And . . . be able to clearly articulate why you installed those particular sights on your defensive handgun.  “They just looked cool!” simply isn’t going to cut it if you need to defend your actions in court.

Many handguns have fairly short release buttons and shooters may well have difficulty in pushing the mag release with a single digit (typically the thumb) while they are simultaneously reaching for a full magazine. One “fix” for this is the installation of an “extended” mag release. This is a magazine release button that is a bit longer, sticks out a bit farther and makes it easier to push the mag release. My only caution here is make sure it’s not so long that you accidently push the mag release while simply gripping your handgun. You could suddenly drop the magazine from your gun just when you need that next round the most.

On some handguns it’s possible to replace a factory safety with a safety that has a lever on both sides of the rear of the gun. If you are a left-handed shooters and shoot a semiautomatic handgun, working the safety on a traditional semiautomatic can be a pain since virtually all semiautomatic handguns are designed for right handed shooters. There is no convenient way to work the manual safety with your left hand as you extend towards the threat. Answer? Either purchase a semiautomatic handgun that comes stock with an ambidextrous safety . . . or have one installed if that is possible.  This is one modification that may well let you run your gun more efficiently and safely.  Again – make sure you can articulate your reasons for this modification clearly should the need arise.

There few other topics, when you begin talking about “tuning” your gun, that generates more conversation than “trigger jobs”. Let’s set those aside and focus on a single topic . . . what’s the purpose of the trigger?

There are a couple. Obviously it either releases the hammer or the striker depending you the type of firearm you have.

In some handguns, there is a component of the “safety” built into it as in Glock “Safe Action” pistol. Some handguns that are “double action” only (typically with fairly long trigger pulls) have triggers that need your finger to travel a fair distance to set the hammer before you can be released to fire the cartridge – adding a layer of safety simply because of the time and strength required to set the hammer.

The typical “pull weight” for a defensive handgun is 5-ish pounds. It’s typically not less than 4.5 pounds and not over 8 pounds. There are some law enforcement agencies that require 10 pounds pull weight – helping officers avoid negligent discharges under stress.

Again, keep in mind the purpose of this particular handgun – it’s for your personal defense. My typical advice . . . go with the trigger that comes with the gun when you purchase it. Try it out before you purchase it. Find a friend with the same model, rent one from a range, try a bit of dry fire in the store. If you don’t find it profoundly unusable or uncomfortable . . . stick with the factory trigger. And, if you choose to “upgrade” . . . stick with the 5-ish pound trigger pull weight.

Finally to the component that actually generated the thought for this post . . . “spare” magazines. Any shooter who does any amount of consistent training on the range will have number of additional magazines. Obviously, for every day carry, you will carry at least one spare, possibly two. For range work . . . and another half dozen or so.

And, as with virtually every component in your handgun . . . somebody else makes that same part other than the original manufacturer. These are called “after market” components. “After” a manufacturer builds a handgun the “market” will seek to find bits and pieces that they believe they can do better . . . hence the “after market” component is born. With respect to magazines for specific handguns – there are innumerable manufacturers out there that will make the “perfect” magazine for your handgun. They don’t always care if their product works well in your handgun . . . they just want you to buy it. Sometimes this is done through some kind of “bling” that’s added to make their product standout. But, most times, it’s simply price . . . their magazine is just cheaper. And, after all, “more is better”, right? If I can buy more magazines for the same money – that’s a good thing, right? MMmmmmm – not necessarily.

During a recent course I had an experience with “after market” magazines. You can read the details here . . . but the bottom line is that when that magazine was inserted in you Glock 17 the gun simply wouldn’t function. I experienced failure to feeds, double feeds, failure to eject, my slide would lock . . . all in abundance. Yet, I had only one of these magazines so it didn’t come through my rotation of magazines inserted in my G17 all that often. I wrote it off to bad ammunition from a new vendor. As you can see in my previous post – the instructor “diagnosed” it quickly and remedied the problem by chucking the half-filled mag down the back of the range while informing me to NEVER USE THAT MAGAZINE AGAIN!!!

How was it different from a standard, factory Glock magazine? The images below will tell the tale. The plastic was thin and softer – meaning that it would flex a bit more than a standard Glock magazine. The biggest – and most fatal flaw in it’s design . . . no steel sleeve insert. Looking into the bottom is the disassembled mag you can clearly see it is simply a plastic sleeve. Add the tension of the spring . . . it’s no wonder the cartridges couldn’t exit the top of the magazine smoothly. 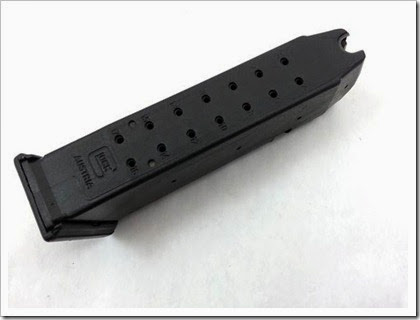 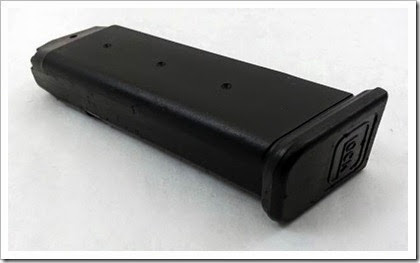 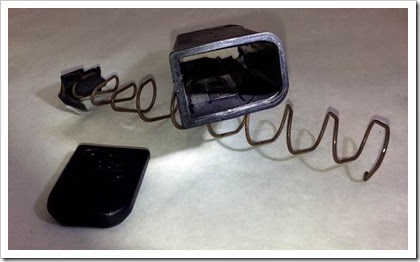 The lesson? It’s simple really . . . each and every component of your defensive handgun is important. It’s what you will use to defend your life should the need arise. If you can’t “feed” the gun . . . your day will not end well.

Pay attention. Remember the purpose of those 30-some ounces of weight on your hip. And, as the Old Knight said . . .

Posted by eiaftinfo at 3:56 PM