Marksmanship: the skill of shooting a mark or target

Any time you get around shooters, eventually the topic of “marksmanship” comes up. It is one of the fundamental building blocks of your skill set as defensive shooters. But, it is just ONE of your building blocks. I want to try and put some perspective on this topic, where it fits into your overall skill set and some ways you may balance your marksmanship against other components like speed and movement.

Marksmanship is your ability to hit your designated target – whether an “x-ring” at 300 yards or that smallish vulnerable spot just below a threat’s nose. It you can’t hit your mark – you, a family member or a friend may well not see another day. However, marksmanship is NOT the skill of making very small groups on paper. If you get it in your head that unless you can shoot a 1-inch group from 50 feet, you’re a failure as a shooter – you’re going to have a number of disappointing days at the range. Let’s spend some time working on some mechanics first . . . . then we’ll work on some different definitions for “marksmanship”.

The basic mechanics of marksmanship consist of a consistent stance, a firm grip, aiming your weapon, managing your breathing and your trigger press. These elements are what allow you to consistently hit your target. Let’s flesh these things out a bit.

Consistent Stance and Grip: I teach what I call a “modified Weaver” – feet shoulder width apart, dominant side foot roughly even with the heel of your support side foot, knees slightly bent and leaning aggressively into your shot. I like this stance because it transitions easily between a long-gun and handgun. You may well find something else that fits your body better, work with it until it “fits” you.

Your grip also in a basic component to consistent shot placement. I spent quite a bit of time talking about it in this post. I’m not going to repeat that whole post here. That said, your grip plays into your ability to quickly and easily come up on target, to control your weapon’s recoil and to effectively aim your weapon each and every time you engage a target or threat. A significant amount of the time you spend in both dry-fire training and range time should be given over to working on your stance and grip.

Aiming your weapon: The individual components of aiming your weapon are Sight Alignment and Sight Picture. Honestly, I have spent a fair amount on this topic as well in my post: “I Just Can’t Hit A Darn Thing With This Thing”. This process is certainly the primary component of making the 300-yard shot or the lifesaving head shot. However, there are other methods of aiming that are more effective methods to engage a threat that is a mere handful of yards away. We’ll chat about those in a bit.

Breath Management: Breathing is a normal process that your body expects to continue. If you stop, it takes notice. If you stop for more than 5 or 6 seconds, it will demand attention – your lungs will begin to exert their will to draw a breath. The tension that begins when you try to dampen this demand will induce tremors in your hands, arms and overall body. Your accuracy simply goes to hell. Because of this I teach a “pause” in your normal breathing cycle of about 2 seconds (I pause at the bottom of my exhalation) for that final bit of stability that helps you insure a solid hit on your target. You DON”T hold your breath for stability . . . . you build a stable platform and then “pause” to finalize your sight picture and press the trigger.

Trigger Press: There are many misconceptions about how you interact with your weapon’s trigger. During my childhood cowboy action heroes like Roy Rodgers used to cock their SA revolver and “throw” rounds at the bad guys while visibly pulling the trigger. I’ve had a number of instructors over the years that taught me to “squeeze” the trigger which induced a whole new range of issues that affected my ability to hold a solid sight picture.

I have chosen to teach a trigger “press” using the end 1/3 of my trigger finger that is “pressed” straight to the rear of the weapon. This works well for me. I have a favorite training tool that I encourage folks to try – a ballpoint pen. I did a video on this quite a while back. Give this a try – work on a firm “press” and then polish it up using some dry fire on your “indoor range”.

This is what you have to work with . . . . these are the primary elements in becoming a marksman. I say “becoming” because it is a skill that demands constant work, constant training and a willingness to invest the time needed to learn, refine and maintain the skill set.

I know this is old ground, but I try to spend 100 rounds or so each range trip on this skill set. Let me use a target from my last range trip to illustrate: 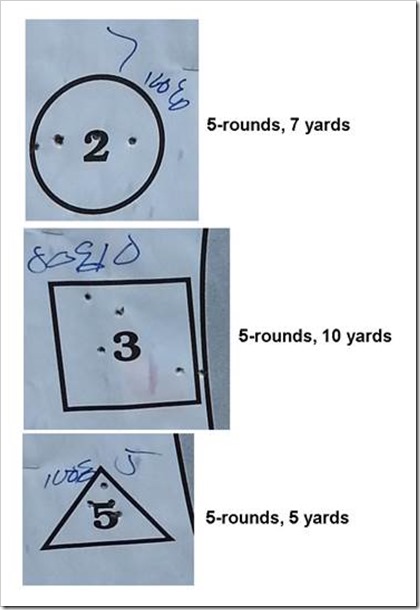 This is the result I had with “aimed” fire – after I drew my weapon from concealment; I took time to get good sight alignment, a good sight picture and then pressed the trigger. Each engagement was two or three rounds each lasting around 5 seconds. This is but one example of a type of target or process that you can use to refine your marksmanship using a target. Another is a “Dot Torture” and Pistol-Training.com has an excellent example of this target. Refining your marksmanship using aimed fire should be a component of every range trip.

There is another element of marksmanship that also comes into play – those elements that lets you make a rapid and accurate first-hit on a threat. These skills move you into the realm of “focal point shooting” where the top of your weapon’s slide becomes your “sight”. The rear of your slide become your “metal on meat” sight that you use when you get a firm two-handed grip, fully extend and simply place “metal on meat” and press the trigger. At close distances, with an existential threat barreling down on you – an alternative is required to allow you to engage quicker while still enabling you to get a solid hit on a threat to encourage them to change their mind about attacking you. Or, to find their “off switch”. I covered the various components of this type of shooting during a range trip that focused on “focal point shooting”.

The results of my target on the same range trip listed above looked like this: 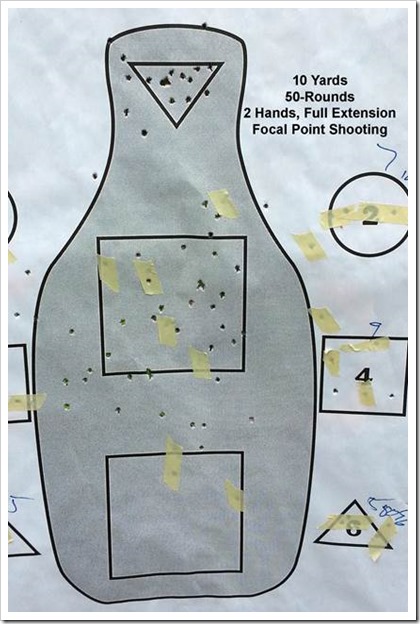 All rounds were fired using a 2-handed grip, full extension putting “metal on meat”. Each engagement was 2-3 rounds. Obviously, there was a much broader spread in my shots. Yet, over 88% of the rounds hit the target.

And, there is the balance . . . . between marksmanship with aimed fire and marksmanship using focal point shooting. There is value in having both skillsets in your tool kit. One will help you make a critical shot at distance – perhaps a headshot with a loved one being held hostage. One will enable you to get a rapid first-round hit to discourage a threat from taking further action against you.

As in all things – there is balance. Balance between aimed fire and focal point shooting. Balance between taking time to make a difficult shot and getting rounds on a threat in the shortest possible time.

There is tremendous value in you working on your marksmanship.