One of the things I have taken on is that I am the President of the local Izaak Walton League.  Long story . . . I felt like I kinda “broke” it about 2 years back and felt obligated to “fix” it.  Members have seen fit to reelect me this past year so for better or worse, they are stuck with me.

One of the areas I have put a lot of energy in are the shooting sports.  We have a reasonably good range with five lanes for 50 yard work and 2-3 lanes for 100 yard work.  Among the many observations I have made over the past two years is that when I have seen most rifle shooters out there, and I ask what they were working on – the usual response was:  “I’m zeroing my rifle!”

So, I was determined to have a monthly “Rifle Shoot”.  Nothing tricky.  The course of fire for a “round” would be 5-rounds standing, 5-rounds sitting, 5-rounds kneeling and 5-rounds prone.  We would use a standard 100-yard target.  Any rifle up to a .308 was fine with iron sights, red dot or scope – it’s noted on the score card.  Obviously this isn’t an NRA course of fire (or any other organization’s for that matter), simply a little friendly competition between friends.  The fee is $10 and you can shoot the course of fire as many times as you wish.  There is an identical setup on the 50-yard range for .22 rim fire.

Still, there were holes to be made.  I sent 6 rounds down range (in 3-round groups) from a bench rest position using my Panther Arms Oracle .223 and iron sights ONLY!!  Honestly I have a bit of a thing about optics.  I have a scoped .308 and an Eotech on the Oracle . . . . but they just feel like cheating.  So, I typically limit myself to iron sights only.  Here is my bench rest zeroing target: 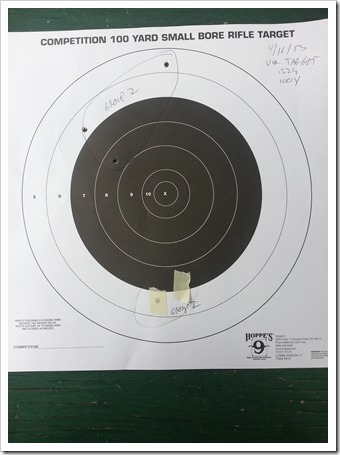 The two rounds at the 6-o'clock that are taped are my first hits – one obviously dropped below the paper.  The three circled at the top are my second 3-round zeroing effort.  On paper, 100-yards, open sights . . . . I made no adjustments. 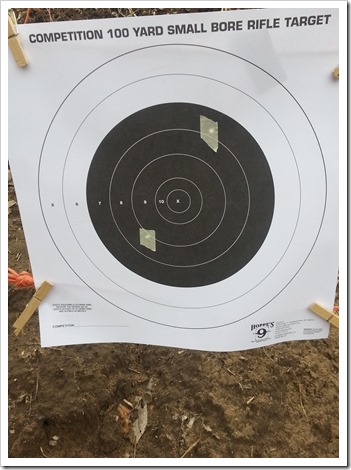 First course of fire, 5-rounds, 100-yards, open sights, standing.  I use a Larry Vickers 2-point combat sling.  I put my support side arm through the sling with it resting on my right shoulder and open the sling wide open.  I take my stance and cinch the sling until I can put about 6 inches of it under my hand grasping the fore grip.  I find this gives me a 5th point of contact – my entire back.  I like it.

That said, I still only had two rounds of 5 on paper for a score of 15.  Heavy sigh. 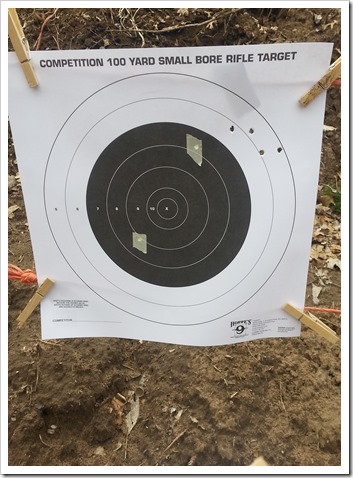 Next up – sitting.  This is a very stable position and, using the Vickers sling for another point of contact – the stability showed.  One flyer and 4 rounds on paper for a score of 21,  Better! 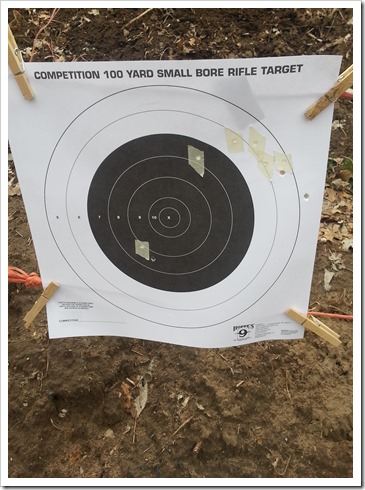 Kneeling was position number 3.  I gotta say my knees let me know they were NOT happy.  Still, it’s a stable position yet only 3 of 5 on paper for a 13.  Heavy sigh. 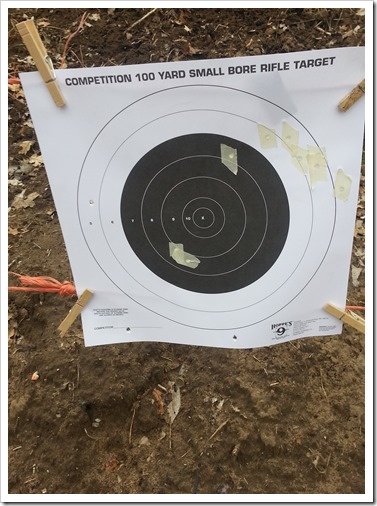 Finally – prone.  I was expecting a lot out of this last round.  Very stable position – heck I should “ace” this one.  Sadly, I did not.  It started with a failure to fee the first round out of the magazine.  Slap, rack and I was ready to shoot.  Then, 3-rounds in a double feed!!  WTF???  Drop the mag, lock the bolt back and the rounds just dropped out.  As I was putting them back in the magazine I noticed one had a severe crimp just rearward of the neck.  I suspect it would not have fed – but if it had there may have been an opportunity for a real problem.  Word to the wise – check you rounds if you eject them during a malfunction!!  Anyway, finished the round with a single hit in the rings for a score of 5 but still had 2 others on paper.

My final score card for a single round through all 4 courses of fire looked like this: 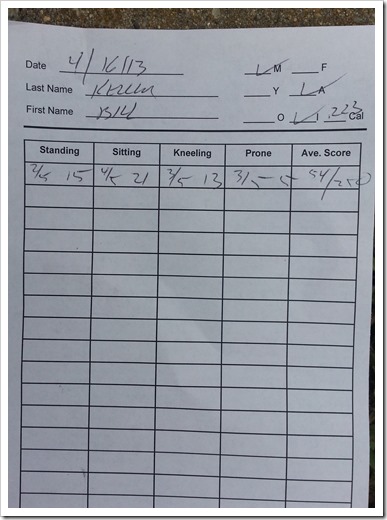 Still, I was happy to be out and shooting.  I was happy with my 4-round group for the seated position – it showed my Oracle can shoot . . . . even if I go a bit wobbly!

So why show a crappy set of targets?  They are the only way we learn . . . is my weapon sighted properly, do I have a trigger press problem, doesn’t every instructor shoot max score for 100-yards with iron sights??  It keeps me honest – with you . . . and most importantly, with myself.

Don’t worry about your score – look at your results, work on the fine points of position, how you mount your weapon, your trigger press . . . details, details, details.  No shooter EVER gets better without rounds down range, target observation and persistence.