Killing isn’t “easy”. It’s not “simple”. It’s not “natural” is the vast percentage of societies and social groups scattered across our planet. Nor should it be . . . . .

For the “professional” – the soldier, the law enforcement officer, the “special operator”, the “agent” – it may well be a part of their life, or at least it may be a real possibility that the day will come then they will be placed in a “kill or be killed” position that will require them to kill. And that is where I would like to spend my time today – those among us who have chosen to “protect and to serve” the citizens of our nation and their friends and neighbors.

Specifically I want to look at how they are trained to overcome the natural resistance we all have to taking a life. And, what does that mean to us – the people they have chosen to protect.

Prior to Vietnam – training soldiers to be proficient with their battlefield rifle (or pistol for that matter) involved traditional target shooting. 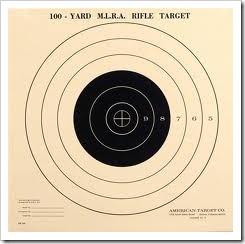 It looked something like this. In fact even to this day, if you watch the shooting competitions at Camp Perry – this is the style of target you will see. The shooter’s group is scored – best score for the entire competition wins. During marksmanship training on the range during WWI and WWII and Korea – the shooter “qualified” with a defined score indicating they had reached the minimum qualification score or were “marksmen” or “experts” or whatever classification the specific service chose to award the shooter indicating they were qualified to take their battlefield rifle to the field, into the trenches or the foxhole or the city and kill the enemy. The only rub was . . . . they didn’t. Interviews of soldiers after the war indicated that even in the case where a soldier had a clear shot at an exposed enemy soldier – only 1 in 5 actually took the shot. 80% let their enemy pass unharmed.

While their skillset to accurately hit a small area at a significant distance improved and was more than adequate to the task – their hesitation on the field of battle insured that in 80% of the cases – a shot was never taken. While they had the skill to Kill, they were not conditioned to kill. Their conditioning had failed – so the military went to work on that.

By the time I found myself on the range and getting my first introduction to the M-16 – things had changed. Gone was the “marksmanship” target – replaced by the Silhouette. 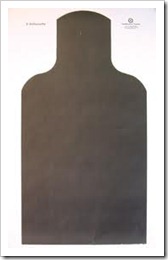 For virtually my entire career – when I went to the range – this was the target I shot. No rings, no “bulls eye”, no center dot. Simply a form that resembled a person at distance – the center mass of their body, distinct shoulders and a head. It was distinguishable as a man – not a “target”, but a man. If memory serves minimum qualification was 80/100 rounds within the body. Expert was 100/100. Shot placement was defined as rounds to the body or rounds to the head. As a shooter you were shooting an enemy combatant – not a sheet of paper. We were being conditioned to engage another human. Natural barriers were being slowly sanded away. In “my war” – Vietnam, this training had a clear effect. As opposed to only 20% of the soldiers firing on their enemy (80% firing not a single shot), 95% of the soldiers in Vietnam fired on enemy soldiers. Think about that change – from 20% engagement to 95% engagement. The internal barriers that the WWII soldiers experienced had been diminished enough that there was a 75% improvement in willingness to engage the enemy.

Training on targets that looked like people at a distance reduced our hesitation and conditioned us to engage enemy soldiers much more easily and frequently. It didn’t do much for accuracy however. It took over 52,000 rounds fired on the battlefield to get a single hit on VC or NVA soldier. So, we were willing to shoot . . . we just couldn’t hit much.

With the initiation of the GWOT – training of the shooter again changed. While not a “uniform” – the enemy bore similar characteristics in their style of dress and specific weapons used. The form of combat changed as well – elephant grass, rice paddies and thatch huts were exchanged for a near desert environment, walled compounds and homes made of mud and poor quality cement. Engagements went from up-close and personal jungle attacks to urban settings with compound/room/house clearing the norm. Put these new requirements together – and targets like this emerged. 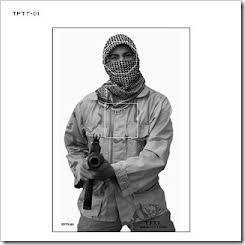 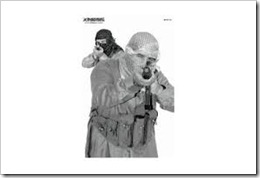 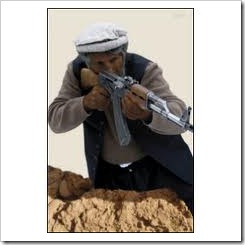 Targets clearly depicted humans, clothed in similar manner with the weapons of choice of our current enemy. While range work is still part of basic training – training for final deployment has moved to training “communities” complete with shoot houses that enable a soldier to experience entering a compound/house/room and clearing it of enemy. Of killing them. Their skillset now included near-instant weapons identification and evaluation of the level of threat and the need to kill or not. Again – they are being conditioned or reduce their hesitation to shoot. It is a fine line . . . . it certainly increases their chance of survival – yet it also increases the possibility of a friendly fire incident that can just as easily cause the death of a civilian as well. Not judging here – war is war . . . . I understand that. I am focused on the result of this type of training – a reduction of hesitation to kill (probably a GOOD thing in the overall scheme of things) and a conditioning of the soldier to kill individuals that fit specific visual profiles.

Let’s move to training of today’s Law Enforcement Officers. Long gone are the “peace officers” of my day with his revolver, 12-gauge and possibly a Winchester carbine. The LEO of today is highly militarized. They wear body armor, carry a high-capacity handgun that is typically either a .40cal or 9MM with defensive ammunition designed to expand quickly, create significant damage yet remain within the body of the threat. Most I know carry a minimum of two spare magazines as well. Their squad car typically is equipped with a tactical 12guage and many also have an AR-15 carbine – again with multiple high-capacity magazines. 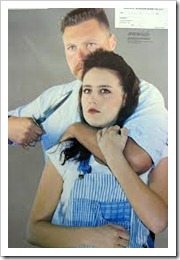 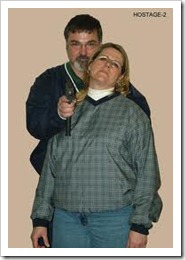 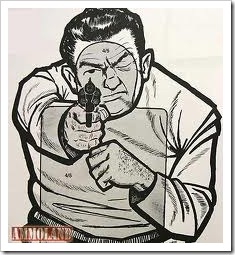 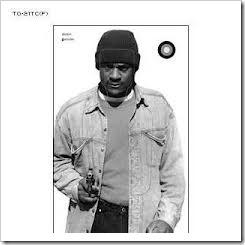 Targets are engaged at distance typical of real-life encounters – 30ft, 21ft or 9ft. The marksmanship target has been replaced by humans that “look” like a bad guy, have a weapon and may well have a hostage in-hand. Add to this training in live-fire shoot houses and force-on-force training and the average LEO is exposed to some very creative and effective training that greatly increases his possibility of survival.

However – there are also real issues that need to be directly and forcefully addressed in this type of training where a LEO is operating within the confines of a community – NOT a battlefield. (OK, it would be hard to tell in some cities.) My specific concern is that the officer’s hesitation to shoot, his need to actually determine the full situation before engaging is being “conditioned” OUT of the officers. Three different instances for your consideration.

First – the POST training I took a few weekends ago. One of the scenarios was a hostage situation that involved moving from one set of cover to another and then engaging the hostage taker while leaving the hostage unharmed. We were on an open range – the target was clearly visible prior to each shooters run. I’m pretty pleased to say I left the hostage unharmed (and put 3 rounds in the center of the hostage taker’s head)  while a number of LEOs worked on the speed of their movement and engagement only to put three rounds center mass . . . . on the hostage.

Second – an incident in Texas. A home is invaded, the husband grabs his weapon and shoots the invader while his wife calls 911. The entire call is recorded by the 911 operator. The wife – and husband – yell at the 911 operator to make sure the arriving police know that he is the one with the gun, that he is holding the gun on the fellow that broke into their home. The police arrive – see the homeowner holding the gun on the invader . . . . . and shoot him multiple times. After they realize their error . . . . they conspire over their comm system to put forth a story that the homeowner pointed his weapon at them and they “had” to shoot him. Their mistake . . . . EVERYTHING WAS RECORDED. Rather than determining the facts – they shot first. It did not end well for them.

Last story (I promise) – a friend of mine is a member of a police force. Part of their training is hostage rescue. They practice the above scenario with force-on-force airsoft weapons. The result – the good guy has a better than even chance of winding up dead.

These instances (an many, many, many more) should act as a reminder to our Law Enforcement community – there is not a ground war within the borders of the US. Dangerous areas – yes. Ground war – NO. Training MUST take this into account . . . . and LEOs must be as accountable for their actions as the citizens they are tasked to protect.

Which brings me to the impetus for this post – a new set of targets from my favorite supplier of targets - “Law Enforcement Targets”. They have a new product line out called “No More Hesitation”. They are specifically designed to further reduce an officers hesitation to engage and shoot a target. Honestly, I find the targets disturbing . . . . 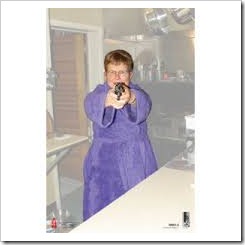 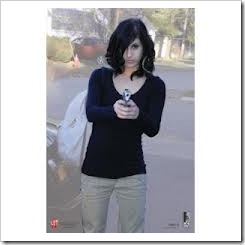 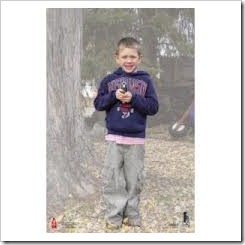 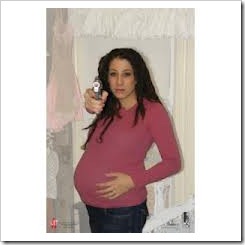 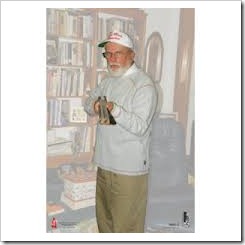 I realize that there are “atypical” threats that LEOs must train to handle. Still, I have to question why these human form factors were chosen. With the exception of the child – I can think of any number of reasons a pregnant woman, a grandpa, a grandma or a single woman may point a weapon at a perceived threat. I realize that there is a whole scenario that is probably scripted before the officer got to the point of shooting any of these “threats” – but still I find myself concerned about the idea of NO MORE HESITATION. I call bullshit. In a community environment – I want plenty of hesitation. I realize that places the officer at a higher level of risk – I see that as part of the job. If it frightens them – go sell insurance. If there is NO MORE HESITATION, if a pregnant woman, a grandpa, a grandma, a young woman are today’s threats . . . . where the hell are we headed?? I also wonder how police officers would feel if civilians trained on targets that looked like a tacked-up LEO?? Frankly, if this is some of the thinking going on it today’s law enforcement community – the citizens of our community’s better get clear real quick what’s acceptable and what’s not.

For those who have not read Lt. Col. David Grossman’s book On Killing: The Psychological Cost of Learning to Kill in War and Society.  I strongly urge you to do so. You are learning a skillset that may well require you to kill someone. There are consequences . . . . and they should be considered well ahead of such an event.

Remember . . . . YOU are responsible for every round.

YOU are responsible for drawing your weapon.

However, your threat is responsible for what finally happens to them . . . .

Train – keep your head in the game . . . . and be willing to do what is necessary to survive.

Posted by eiaftinfo at 4:18 PM