On October 9th I conducted a NAPSI Foundations of Defensive Pistol (FDP) course for a class of 4, 3 women and one guy.  The average time for this course is 9 hours including both SIRT and live fire range time.  It was a good group!  So let’s chat about how it went.


The FDP course is designed to do two primary things.  First, to begin to move the student’s mindset into the defensive use of a firearm world.  And second, to cover a wide range of foundational material from holsters to shooting from cover.  There is no holster work, all shooting is done from a firing line from the High Compressed Ready.  But the drills are comprehensive and designed to provide a solid starting point to move forward in their defensive pistol skill set.


There are 10 primary lessons that the students covered . . .


As you can see, it was a busy day that started at 8 AM and finished just after 5 PM.  Everyone went home appropriately tired.


It has been my experience that the majority of students come to a first level course with the intent to fill the square to get their carry permit.  This obviously varies from state to state and is a very simple task to accomplish in Iowa.  Next, most truly want to learn something.  And finally, those who want to learn want range time as well.  The FDP course filled those items for these folks.


It began with a review of the handguns they would typically choose to defend themselves.  Each type was covered in full so as they went “out into the world” they could make better choices for a firearm that would work for them.


Then we talked about safe gun handling.  We have adopted Cooper’s 4 rules simply because we believe they are more applicable in the defensive use of a handgun world.  We talked at length about each and how they are relevant to the save use of a firearm.


Next came an introduction to holsters, belts and different types of off body carry.  It is my opinion that this is an area that is all too often neglected yet is probably one of the most important things the students need to get right in the real world.


We worked our way through the range commands we would be using and then talked about the care and cleaning of typical types of handguns.  This brought us to lunch – I think everyone was approaching overload so the timing worked well.


After lunch we began with defensive shooting fundamentals, defensive mindset and worked through the primary concerns when choosing a defensive handgun.  Here, one specific item fell out when we talked about defensive mindset.  I’m working on a more extensive post but, in a nutshell we chatted a bit about the 2nd Amendment, it’s importance and what it means to us as Americans.  In under all the politics, all the jockeying for position, all the solid information and the disinformation that floats around out there . . . there is one fundamental truth at the end of the day . . .


You have the natural right to live . . . and no one has the right to take that away from you.


From here I move to a SIRT range.  I worked the students through the use of a semiautomatic pistol, the loading and “racking” of the slide (yes, I know they don’t move).  Then we worked on stance, grip, sight alignment, sight picture and trigger press.  We worked through a number of drills starting with the Drive-Touch-Press drill up through accelerated pairs.  Honestly, this SIRT range time is golden!  If you have not tried it, get yourself a SIRT and see for yourself.  For instructors, SIRT range time make the live fire more valuable and safer IMNSHO.


Next was the move to the range and working through the course range drills.  Again from the Drive-Touch-Press drill through Accelerated Pairs.  This moved to use of cover and concealment, a challenge drill and finally a qualification shoot.


Off the range . . . back to the classroom and on to the written exam, a few final thoughts and then a course debrief.  It was a good day! 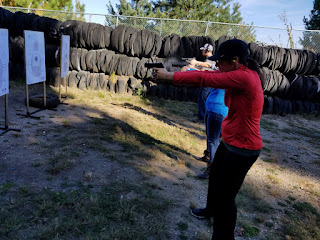 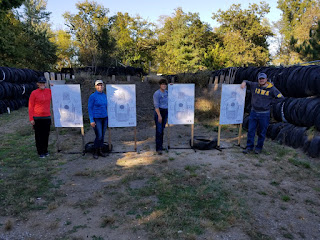 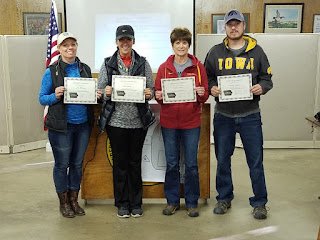