Communicate:    to convey knowledge of or information about


to transmit information, thought, or feeling so that it is satisfactorily received or understood


So I’m leaving my client’s offices and headed to Ernie’s store to see if he has any SKS Stripper Clips.  He’s outside suckin’ on a cigarette and sees me coming across the parking lot.


“Damnit Bill . . . you missed the whole point!  Rob gave us a call and chewed my butt!!”  and so began the conversation about my Facebook post about two specific drills I shot for the Combat Focused Shooting course I took a few weekends ago.  The conversation with Ernie showed an interesting and disjointed process of . . . the purpose of the drill . . . how it was explained . . . what the goals were . . . what my goals were . . . my mental purpose while shooting the drills . . . and what I chose to write about.


First – let me allow you all to read the post that started this all . . .


OK . . . just a bit of braggin'. . . I spent this past Sunday training with our local PD. They had brought in the Combat Focused Shooting course from Rob Pincus with local instructors Ernie and Mike. Both are LEOs. These photos are two different drills. The first (one with drawings on it) was intended to show your accuracy as your speed increased. First target was the Red "1" circle. The drill was 5 rounds spaced 1 second apart at a distance of 9 feet. (The one flyer off to the left was from an earlier drill) Got all 5 within the circle.


Next drill was 5 rounds, 1/2 second apart on the Green "3" circle. Again, the shooting gods were on my side.


Finally the last drill was 5 rounds on the Blue "5" circle as fast as you could press the trigger. Gotta say I was pretty happy with the results.


Next drill - "Around the world". 6 rounds - one per circle. We did this 4 times. You drew once while moving to the side, drove to the target and fired the round. You did a complete scan for other bad guys, stepped sideways in the opposite direction, drove out and fired again . . . repeat until you missed or completed all 2 targets. Got'em all. smile emoticon:) Next drill, same as above but you could use as many rounds as you needed to put 1 round in each circle. Again, got them all with the first shot. Third drill, same as the last . . . and once again I shot it clean. The final drill, again same as above - but we were to push out time and do it as fast as we could and still get the hit. Again, the gods were favorable - and it was a clean round.


It was a long, hot and very rewarding day! Thanks to Mike and Ernie for their time, it was a great course! 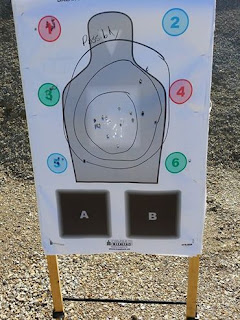 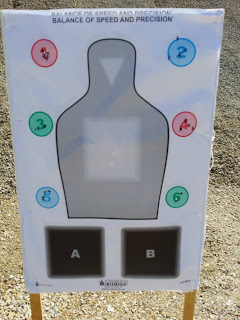 ----------------------
Communication is a complicated thing.  From the instructor’s POV there is what I want to say and then what I actually say.  From a student’s POV there is what I heard and how I interpret it.  The two may not resemble each other in the slightest.  When I have my instructor hat on I am fond of asking the question “does that make sense??”  That allows a student the opportunity to think and respond to what I am asking and it allows me a chance to hear what they understood from what I said.

In coursework – especially coursework that is taught by multiple instructors – what you should expect is that “the course” should be taught the same each time regardless of the instructor.  In this case I was going through the 1-day Combat Focused Shooting course taught by two local instructors, Ernie and Mike.  I’ve taken the 2-day version from Rob Pincus and the 1-day carbine also from Rob.  Rob’s company has an instructor development process that is very rigorous and it produced what I expected – consistency.  What I heard from Ernie and Mike was exactly what I heard from Rob.  The flow, the drills, the “words” to explain the “whys and how’s” were essentially the same.  THAT is how it should be.  Good coursework that is taught by multiple instructors should come out the same, regardless who teaches it.  THAT is the job of the instructor – and those who taught them.


That said . . . what also plays into the mix is where the student’s head is while they are tking the course.  Here’s what was going on for me.


As is usual for me (and I expect most shooters) – I don’t want to look stupid.  I want to do well and demonstrate that I’m a competent shooter.  On top of that this particular course is being conducted for our local community LEOs – who I help train.  Just a bit more pressure added – I need to demonstrate to them that I’m a solid shooter – otherwise why should they even bother to listen to me?  And finally – I’ve literally spent a couple thousand rounds this year working specifically on my shooting accuracy and trigger control.  All of this is at the front of my brain throughout the entire course.


As you can see – there is a fair amount going on between the instructors teaching and me listening, learning and shooting.  All this affects the ability to “kamooooon-icate”.


So how does all of this relate to the butt chewin’?  First was the expectation that all the drills were to be taught from a very specific POV.  The first drill in questions was firing 5 rounds in 3 different circles.  The first circle the rate of fire was to be 1 round per second.  The next circle was 1 round per ½ second and the final circle was 5 rounds as fast as you could press the trigger.  The purpose was to have the shooter see that as they shot faster the groping typically opens -  all rounds within the 2 inch circle for the first circle and a fist/palm sized group for the last when the rate of fire was as rapid as you could make it is how it usually goes.  And that is how it went for 8 out of 10 of us on the line.  THAT was the lesson – the hits were still effective even though the group opened up.
In my particular case – since I’ve spent so much time and energy increasing my accuracy and controlling my trigger press – what I wanted was to have the speed . . . but I really wanted all the rounds for all three circles to all be within the circle.  That was where my focus was – regardless of what Ernie and Mike communicated.  I was successful at that and I “tooted my own horn” in my post about it.  Which communicated that I missed the whole point of the exercise as far as Rob was concerned (we’ll see if I’m getting this right as far as he’s concerned in this post).  Actually – I do get it, I was just happy I met my goals.


The thing I like about the exchange Ernie had with Rob is that is shows they both care that what they are trying to teach is fully understood.  Good coursework, good instructors hammer on the little stuff.
The second drill that Ernie got tapped on was the “take a lap” drill which I mistakenly called “Around the World”.

There’s a lot happening in this drill.  Single round engagements on 6 circles with movement and a complete scan and assess after each round along with reloads as necessary.  Ernie pointed out I got the sequence out of order.  The first lap you had 6 rounds only and had to stop on the first miss.  Second time you could use as many rounds as you needed to put 1 round in each circle.  Third lap again as many rounds as you needed but you needed to accelerate your pace.  And the last lap was back to a only 6 rounds to complete the lap stopping on the first miss.  (hope I remembered the order right this time)


The question asked at the end was – which lap caused the greatest amount of pressure.  For me it was the very first lap – going back to my desire to perform well.  Typically, it seems the last lap causes more anxiety because the shooter is back to only 6 rounds to complete the lap.  The bottom line for me again goes back to the idea that I’d spent a great deal of time and energy working on both accuracy and trigger press – I expected to complete each lap and I expected to do that with only 6 rounds per lap . . . which I did.


How the words are spoken, how things are demonstrated, how the coursework flows are the responsibility of the instructors.  How the words are heard, how the drills are executed and how well the student listens are the responsibility of the student.  What allows these things to mesh is our ability to “kamooooon-icate”.
At some level – we had a failure to kamooooon-icate.  It didn’t affect the effectiveness of the course but it did indicate that my head was elsewhere in a couple of instances . . . and that the instructors cared enough to clear things up.  And THAT is what you expect for a solid training company.


Thanks to Ernie and Mike for your time, I picked up a ton of things to continue to work on.  And thanks to Rob – always good to know you’re watching how things are going.