A few weeks ago a Scout of mine gave me a call. I gotta say I’m proud of this guy. From a Scout who definitely knew how to push all my buttons to an Afgan Vet, EMT, Fire Fighter and now Law Enforcement Officer with a BS in Criminal Justice – he’s definitely squared himself away!

The call was asking for my help to work with him to insure he’d pass his ILEA pistol qualification course of fire. Honestly, nothing pleased me more that he asked me to lend a hand . . . and to watch him move through the course of fire ultimately passing during our training session. It was a good day.

A text appeared a few days later stating that he had shot the course of fire 3 times for his training officer and had shot a qualifying score each time. He was a pretty happy critter!

Let’s chat a bit about a defensive carbine – in this case an AR with a 16 inch barrel. To me the key here is to keep it simple. A set of iron sights, some type of reliable optical sight – EoTech, AimPoint, a mounted flashlight and a sling. Past that . . . not so much.

The weapon “B” brought was fairly standard with a scope he had picked up from a local electronic sale site and a front grip with a drop down bi-pod “foot”. He’d forgotten his rear sight so I sent him off home to pick it up.

When he returned I had him remove the front grip, the scope and then mount his rear iron sight. I asked him if he’d already zeroed his carbine and discovered 1) he’d not sent many rounds down range with this particular rifle and 2) he had no real idea how to actually go about zeroing the weapon.

Brief detour here . . . this was a combat vet with a tour in Afghanistan under his belt. So I was curious how much weapons training he’d actually had before he deployed and went on patrol. The short answer is very little . . . very little. In fact not much more than I received back in 1969 before I deployed to VietNam. All sight adjustments were made by the range officers – not the shooter. Now – move to a Ranger battalion or special operations group, different story. But every day troop . . . pretty thin training.

So, his first expectation of the day was that he would spend most of it zeroing his weapon. To his delight I taught him the 10M – 50Yard zero method and within 6 round we were “home”. We took a final target out to 50 yards, made some last tweaks and he was putting the rounds in the black with little effort. A weapon zeroed in this method shooting a 55 grain 5.56 round will be zeroed for 50 yards . . . and 200 yards while shooting a tad over an inch high at 100 yards and a under 2 inches low at 10 meters. A very good “zone” to be in for a defensive carbine. 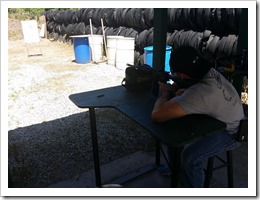 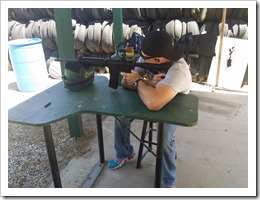 We then mounted his scope well forward of the rear sight and began to zero it using the same method. We quickly discovered the scope was trash with the Windage adjustment spinning freely with no effect on the zero. It was a hard lesson to learn that a used $80 scope is probably not your best choice for gear you are betting your life on. It made its journey to the trash can and we moved on to doing some real work.

This is the ILEA CQB qualification course of fire. It begins at 50 yards and ends at 7 yards. It’s a 50 round course of fire and passing is a score of 90 meaning you can drop 5 rounds. 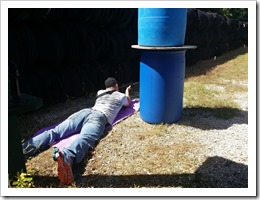 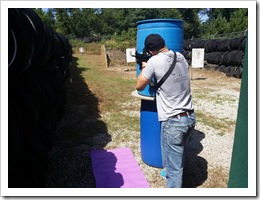 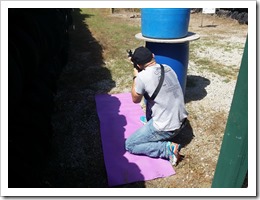 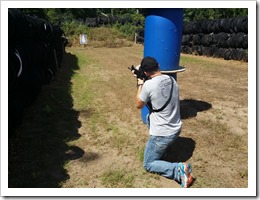 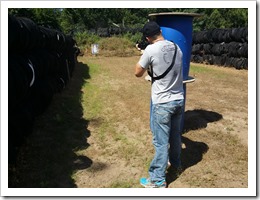 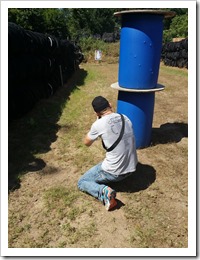 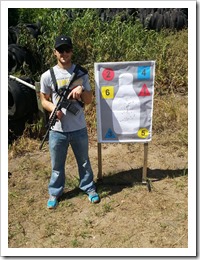 Three primary positions were used – prone at 50 yards along with high barricade standing and low barricade kneeling. We chatted about each position, evaluated each of his positions and the executed the ILEA Rifle CQB course of fire. His first pass through saw a passing score. Not to say there weren’t any hiccups as can be seen by the Stage IV video. When you hear “load and make ready” you should . . . you know . . . load and make ready.

Since he had no optic the entire course of fire was iron sights only. Honestly, I’d encourage anyone shooting this type of qual course to do it with iron sights. That is your worst case scenario. If you grow dependent on an optic of some type to get hits out to 100 yards, “murphy” may well have his way with you which could prove to be a very bad day.

From here we moved to the ILEA Rifle Marksmanship course of fire with all stages at 100 yards. The first stage is supported and unsupported prone slow fire, the second is standing, kneeling and sitting and the third is standing and kneeling barricade. It was here that I learned yet another item about our current military training. It seems they no longer teach the sitting position. So, we took some time, worked through a couple different seated positions and found one that he liked.

His first effort at 100 yards proved unsuccessful with a handful rounds outside the silhouette. In glancing at his rear sight I noticed that he had failed to move to the small aperture opening on the rear sight rather than the large CQB opening. I’m fairly confident he would have brought in those rounds that slipped outside the lines. To give him an idea of what a holographic optic can do I pulled my Eotech from my carbine and mounted it to his weapon and shot the course of fire again . . . and this time he passed. 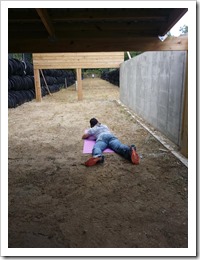 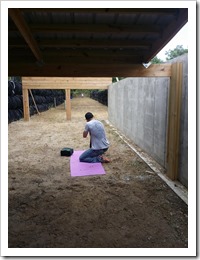 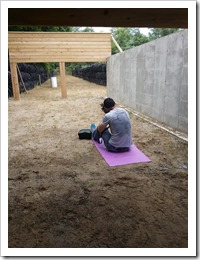 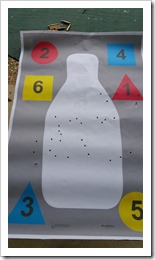 There were a couple take-aways from both courses of fire. Fundamentals matter . . . period. A solid mount, smooth trigger press, good sight picture and sight alignment all matter when the rounds hit the paper. And, finally, don’t rush your shot. For example stage 1 of the rifle marksmanship had a time limit of 5 minutes for 10 rounds. He finished his course of fire, we walked down to check the target . . . and back to the shooting position . . . and still had 23 seconds on the clock. DON’T RUSH THE SHOT!

I offered him a couple suggestions – the biggest one was to find a nice single shot bolt action .22 and spend the time on the fundamentals of the 3 primary shooting positions and then use a bench rest position to really hone his sight alignment, sight picture and trigger press. They are fundamentals that will easily move between all his duty platforms.

It was a good day. 5 hours. Hotter than crap.

So how does my former Scout, now a LEO, and his need to shoot a qualifying score on two separate courses of fire apply to us – the civilian shooter. I think his requirements apply to us in a couple of ways.

First – it sets a “bar” for us to look at and meet. It is a particularly high bar? No, not really. Yet, it is one method for us to gage ourselves against both professionals and our peers to see how we stack up. And, it provides one level of “gut check” for us. If we can’t qualify on these two particular courses of fire . . . we have work to do.

Finally, when was the last time you spent 5 or 6 hours on the range actually running your defensive carbine? If you’re like way too many shooters rifle time is typically spent bench rest shooting and trying to make the smallest group possible. The reality is that should you need to use your defensive carbine to resist an IMMEDIATE and LETHAL THREAT . . . it’s probably going to be at pretty much the same distances as you would use your defensive pistol at. Run your gun. Push your limits. Stress your weapon. Then, fix the problems . . . and repeat.

So there you go. “B” got good work done and we can use his example to insure that we are the best defensive shooter we can be with a carbine. Now, go spend some time at the range!

Posted by eiaftinfo at 8:25 PM