Training - So When You Say the Word “Aim” – What Do You Mean?

The argument between the value of “point shooting” and “aimed fire” came to life again recently. Much like the 1911/Glock or .45/9mm discussion favorites – trenches are deeply dug on both sides of the “point shooting” / “aimed fire” discussion. Everything’s been said over and over and over . . . again. So why yet one more discussion? Because it’s my blog . . . and I want to present it in a bit broader scope to the “new and inexperienced shooter” that my blog caters to in such a way that they realize “aiming” their defensive weapon requires a continuum of skills . . . it is NOT an either/or situation.

You are talking about the defensive use of a handgun to defend your life, the life of your family or someone in your charge.

You MUST SHOOT to save your life, there are no other options available.

You are fully aware of the various elements of AOJP and can clearly articulate your you HAD TO SHOOT to save your life.

You fully understand the concept first described by Rob Pincus – there is a “balance of speed and precision” that is defined by the individual characteristics of each defensive shooting engagement.

You understand that well over 80% of all defensive engagements occur at a distance of 15 feet or less. And, that few exceed 30 feet.

You are the prey . . . your predator will give you little to no warning. It is your responsibility to be aware of your surroundings and potential threats as well as options for escape and evasion.

You understand that distance is time . . . and there is little time when the shit hits the fan. Your attack may be as close as physical contact and require little more than rolling your body so your defensive handgun is centered on your attacker to 30 feet or more with a predator holding a knife to the throat of a spouse or child . . . with the police minutes to 10s of minutes away where a single precise shot is your best chance to stop the threat to your family.

In other words, a violent attack on you, your family or someone in your charge can easily cover a continuum of distances from contact to 30+ feet. Your skill set must provide you the ability to meet a deadly threat anywhere within this range of distances. You must be able to place defensive rounds on your threat that quickly inhibit their ability to continue their attack.

A starting point for “very up close and personal” – within 4 yards – is a tome written over 70 years ago by W. E. Fairbairn and E. A. Sykes entitled “Shooting to Live”. I find that many times their methods are simply cast aside with some type a derisive comment about “point shooting”, references to how inaccurate it is, comments about only “accurate hits” count and that the drive to “aimed fire is the only way to go.” It makes me wonder if they ever read the book or why they cherry pick arguments that fit their point of view rather than give these gents a fair hearing.

Their methods were developed after evaluating nearly 600 shooting incidents . . . to believe they have nothing to bring to the table is terribly short sighted.

At the very beginning of the book the first chapter is entitled “Purposes of the Pistol”. Let me quote a rather large section of that chapter.

CHAPTER I - PURPOSES OF THE PISTOL

By “Pistol” is meant any one-hand gun. This book is concerned with two types only: (1) pistols with revolving cylinders carrying several cartridges, and (2) self-loading magazine pistols. For convenience, the former will be referred to henceforth as “ revolvers ” and the latter as “ automatics.” The word “ revolver ” has long been accepted by dictionaries in almost every language. If “ automatic ” has not yet been quite so widely accepted, it is, we think, well on the way to being so, and we shall not be anticipating matters unduly if we. continue to use it in the sense indicated.

Excluding dueling (since it is forbidden in most countries and appears to be declining in favor even in those countries in which it is permitted tacitly or otherwise), there seem to remain two primary and quite distinct uses for the pistol. The first of those uses is for target shooting (i.e. deliberate shooting with a view to getting all shots in the ten-ring on a stationary target). Its second use is as a weapon of combat.

This book is concerned solely with the latter aspect, but it must not be inferred on that account that we in any way decry the sport of target shooting. On the contrary, we admire the high degree of skill for which it calls and which we personally cannot emulate. We recognize the great amount of patient practice necessary to attain such skill, and we can see that in suitable circumstances the inclusion of a target pistol in the camper’s equipment would not only be a source of pleasure but might be useful as well. Target shooting has its place and we have no quarrel with it.

There probably will be a quarrel, however, when we go on to say that beyond helping to teach care in the handling of fire-arms, target shooting is of no value whatever in learning the use of the pistol as a weapon of combat. The two things are as different from each other as chalk from cheese, and what has been learned from target shooting is best unlearned if proficiency is desired in the use of the pistol under actual fighting conditions.

These views are the outcome of many years of carefully recorded experience with the Police Force of a semi-Oriental city in which, by reason of local conditions that are unusual and in some respects unique, armed crime flourishes to a degree that we think must be unequalled anywhere else in the world. That experience includes not only armed encounters but the responsibility for instructing large numbers of police in those methods of pistol shooting which have been thought best calculated to bring results in the many shooting affrays in which they are called upon to take part.

There are many who will regard our views as rank heresy, or worse. We shall be content for the present, however, if in the light of the preceding paragraph we may be conceded at least a title to those views, and we shall hope to fortify the title subsequently by statistics of actual results of shooting affrays over a number of years.

At this point it would be advisable to examine very carefully the conditions under which we may expect the pistol to be used, regarding it only as a combat weapon. Personal experience will tend perhaps to make us regard these conditions primarily from the policeman’s point of view, but a great many of them must apply equally, we think, to military and other requirements in circumstances which preclude the use of a better weapon than the pistol—that is to say, when it is impracticable to use a shot-gun, rifle or sub-machine gun.

In the great majority of shooting affrays the distance at which firing takes place is not more than four yards. Very frequently it is considerably less.

Notice that they have clearly set the table. They are discussing pistols – both revolvers and “automatics”. They have differentiated between target shooting and combat. And believe me, the use of your defensive handgun – at close distances – to save your life, your family’s life or the life of someone in your charge is, indeed combat. They had the opportunity to evaluate the use of a pistol simply because the city they were located in – early 1930s Shanghai – was one of the most violent on earth at that time. Based on their evaluations, they developed 5 separate shooting positions for their officers to become proficient with: Close Hip, Quarter Hip, Half Hip, ¾ Hip and full extension. The first four for use WITHIN 4 YARDS OR LESS . . . 12 FEET OF YOUR LETHAL THREAT . . . and the final to be used if it was at all possible. Let’s chat about these a bit.

Draw your weapon, lock your elbow, drive your elbow down and your weapon will be pointed at the threat. Ideally you’ll be squared to the threat, more than likely using your support arm to fend off the attack. But, you may also need to turn your body to help defend your weapon from being taken away. The point with this position is that it is employed VERY close to the attacker where there is no opportunity to extend it to provide sight alignment/sight picture. While pin point accuracy is not available, “defensive accuracy” certainly is and these early rounds can be used to begin to stop your threat and to create distance so more accurate methods can be used should follow-up shots be required. 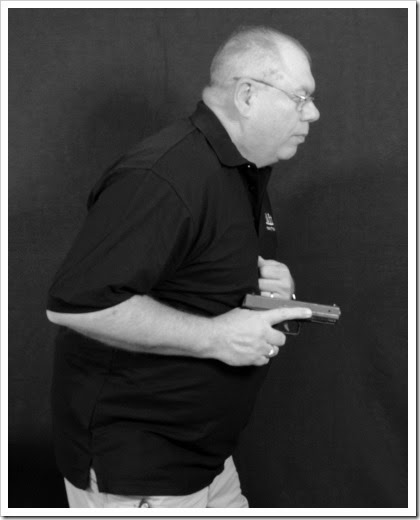 Once your weapon is drawn, you are always trying to drive to your most accurate shooting position – one that is two handed, fully extended. That said, you may have a bit more distance available but a threat that is still way too close for full extension. As you drive to full extension, you will find that ¼ of the extension – Quarter Hip – will become a more accurate shooting position than Close Hip. 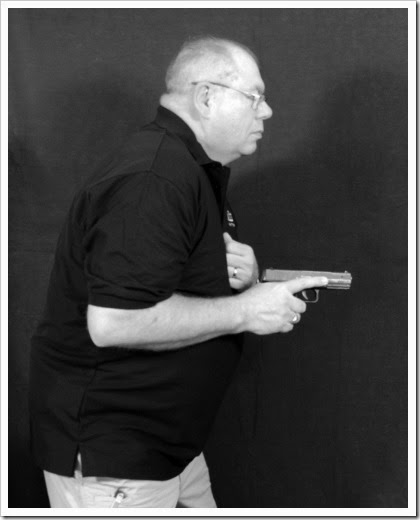 As your distance to the threat increases so does your ability to extend towards the threat for a more accurate shot placement. Half Hip is half way between Close Hip and Full Extension and, again, provides better accuracy. 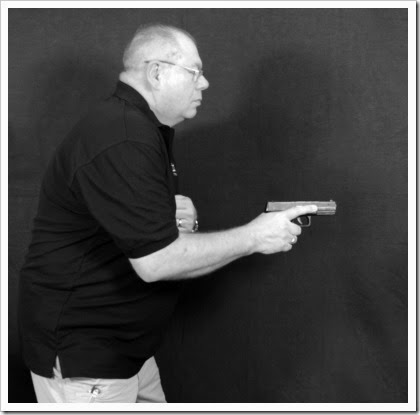 This is the position that most of the recorded engagements occurred. It is still a single hand shooting position but you have your weapon moving towards eye level and your ability to get solid defensive hits becomes much higher at this point. 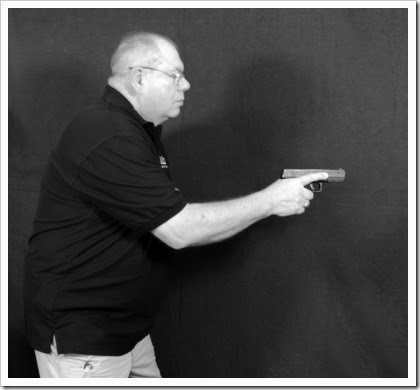 Full Extension provides the ability for a solid sight alignment/sight picture but the situation may not. You have other options available. You can “look through” the back of your weapon and “through the barrel” when you are at very close range and use that as your method for “sighted fire”. Or, you can simply use the top of your slide or barrel for sight alignment. 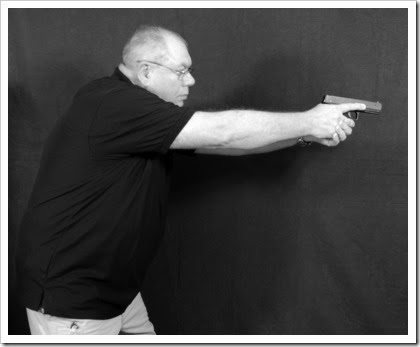 One of my favorites for close distances – 15 feet or less – is “metal on meat”. Place the metal of the rear of your slide on the center mass – the meat – of your attacker. Press the trigger and your probably of an effective hit on the attacker is very high. 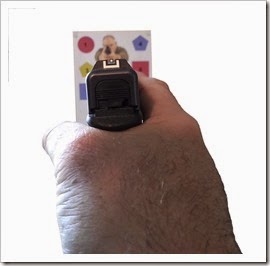 You can use a couple rapidly placed defensive shots at very close distances to provide you the opportunity to create distance. With distance comes time and with time comes the ability to switch to fully sighted fire. Once you are up and on the threat mere milliseconds are required to shift your focus from the attacker to your front sight to bring your accuracy to a much higher level.

At this point, you are typically past the traditional 7 yard distance and pushing out to 10 yards or more. Should the opportunity to disengage and escape present itself - TAKE IT AND LEAVE! On the other side, should you find yourself free of the attacker but a family member still under attack, the distance buys you time for a precision shot to defend them from the attacker.

Defensive shooting is NOT one or the other . . . it is NOT point shooting or aimed fire. It is a continuum of options from Close Hip through a fully sighted precision shot. It is your responsibility as a defensive shooter to be able to “make the shot” that is required to defend your life. Take some time to develop your shooting skill set. It takes work. It takes time.