Along the west side of the drive that leads to my home my neighbors have four apple trees that are absolutely bursting with fruit this year. Last week my wife ran short of apples that she gives to the horses she trains and she asked our neighbor if she could pick a some to take with her – we were given the green light to pick as many as we wish and in the days following a couple sacks appeared below the tree containing those apples the had fallen.

In years past the vast majority of the fruit on these trees simply returned to the earth as fertilizer for the next years crop – this year will be no different. And that brought about this post – “Lost Bounty”. 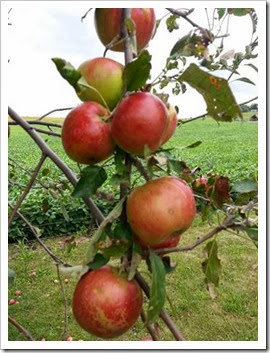 I literally straddle the generation that moved from a primarily agrarian society to one that depended on manufacturing to acquire money to purchase food rather than raise it. My Grandparents moved from the city of Saginaw in Michigan to the small community of Birch Run and purchased an 80 acre farm at the very beginning of the Great Depression. It was a fortunate move for while old friends were not always well fed, the farm provided food and crops for sale. My grandfather died in the late 40s and my Grandmother eventually sold the farm and moved into the “city” – a community of 1,250. My mother made the transition away from the farm, working as a clerk in a grocery, then as a hairdresser out of our home and finally retiring as a postal clerk. My father left the farm early and became one of the flood of workers that built GM from the early 30s until his death if 1957. My time on a farm can be measured in days of my life and little more.

That said, my wife and I enjoyed the fall tradition of “putting up” the garden and for most of our early years of marriage, a handful of weekends were dedicated to preserving fruit and vegetables that were either homegrown or purchased by the bushel from local growers. This included – literally – bushels of peaches, pears, plumbs and apples as well as pan fulls of green beans and tomatoes. The primary method of preservation was canning and that’s what I want to briefly touch on here. This is NOT a primer on canning but a brief introduction of the two primary methods that are commonly used. There are dozens of books available that will fill in the “blanks” for you – simply search Amazon for “canning”.

Canning utilizes two primary methods – a “Hot Water Bath” or a “Pressure Canner” . Let’s go over the basic equipment and what is typically “put up” by each method. 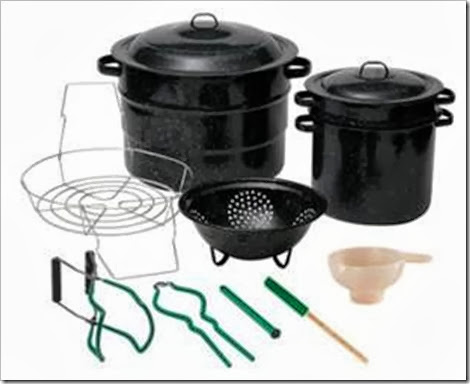 There is a large (and sometimes smaller) cooker, a jar carrier that is lowered into the water, a colander, funnel, tongs and a tool to grasp the hot jars and lift them out of the water bath.

You also need canning jars, typically either pint or quart sizes are used. 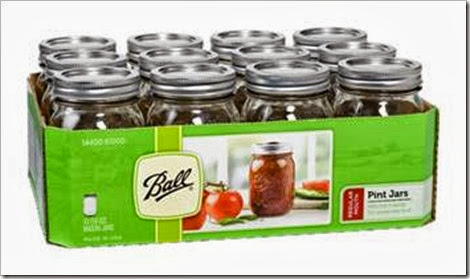 The jars are sterilized by placing them into a boiling bath for around 5 minutes. The lids are placed in a separate pot of boiling water as well.

Your fruit or vegetables are prepared, the jars are emptied and set on the rack and then filled with whatever you are canning. Once they are filled, the lid is secured to the jar and they are lowered back into the hot water and brought to a slow boil for a defined amount of time depending on what is in the jar.

Once that time is reached, each jar is lifted out and set aside to cool. As they cool you will hear a “Pop!” which is the lid sealing. At that point you have a sterile food product fully sealed in a glass jar. No refrigeration is needed for storage which can easily see you through until the next year’s harvest is ready for preservation.

For items that require processing at higher temperatures – typically meats and some types of vegetables – a Pressure Canner is used. 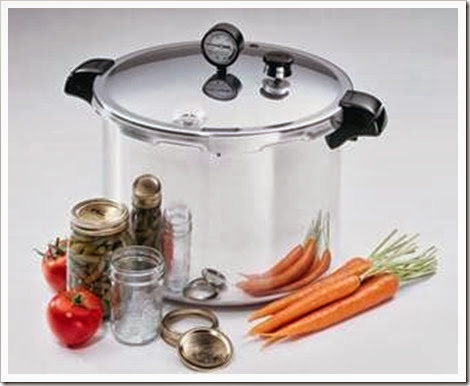 The higher temperatures are achieved by elevating the internal pressure of the cooker a couple of pounds. The required pressure is dependent on the type of food that is being preserved. In days gone by venison, beef, pork, yard raised chickens, rabbit and a host of other types meats were canned in this fashion. A nice side effect of this type of preservation is that the meat is fully cooked when you are finished, this makes food preparation fairly easy.

I realize everyone is busy and canning is time consuming. Frankly, with just the two of us today – we have passed along the cases and cases and cases of canning jars and equipment to our kids or the kids of friends. We eat much less today than when we had a full house!

The advantage to you – when considering basic prepping – is that it is a cost effective way to extend your stores, the final product is not dependent on refrigeration for preservation and there is always an abundance of “extra” tomatoes or green beans or apples or pears or peaches . . . . to name just a very few items that are typically available in and around a community. It is truly a “Lost Bounty”. Please, learn this simple skill. You can purchase a beginning canning kit for well under $100 and for another $100 you can have enough jars of “Lost Bounty” to stretch your budget and provide a good tasting addition to any meal.

And, rather than letting good food simply turn into fertilizer – you can feed your family with very little extra effort.

Posted by eiaftinfo at 9:22 PM