Lost: unable to find the way

Navigate: To plan, record, and control the course and position of yourself or your vehicle

When introducing a person to the wilderness for the first time, one of the first questions typically asked is . . . “What if I get lost??” My usual response is – “Don’t get lost!” I’m sure it sounds a little flip to the new folks, but honestly that is the answer – just don’t get lost. I’ll do a complete post sometime down the road on preparing for a trek – at least the way I prepare – but as far as navigation is concerned, I spend a significant amount of time before I even throw the first item in my pack planning my trek or paddle. Included are entry and exit points, headings, distances, camping spots . . . . I know before I set a single foot on the trail or in the canoe where I am and where I’m going. During the trip my location is verified by specific points along the way – mountain peaks, streams, portages, camp sites – all noted to keep my on my path. For me – it’s simply habit now. I find one of the most enjoyable parts of the trip anymore is the planning, finding navigation points, defining headings throughout the trek or paddle. I spend so much time planning, the trek becomes a process of confirmation of the plan. I know – I’m a geek – live with it!

That said – there is still opportunity for things to go south. Usually through carelessness – say a nighttime trek into the woods to “answer nature’s call” and you just get turned around. You pass through a nasty set of rapids, dump your gear and your navigation equipment is lost. You become ill on a solo trek and in your confusion you simply become lost. Or, you’ve become fully dependent on that little GPS in your phone or pocket – it suddenly goes south on you. Suddenly – you look around and wonder . . .

There’s a whole lot tied up in that question. Along with a tremendous surge of adrenaline and perhaps just a touch of fear . . . . when you realize . . . . you really don’t know. Dealing with the initial “holy crap – I’m LOST” is an entire post in itself. But, there are elements that you can assemble to help you take the edge off during your trip prep and during your trip.

“Lost” is a relative term. For example, when I travel to the Boundary Waters Canoe Area (BWCA), the trip is typically for a week and we paddle anywhere from 50 to 75 miles. We plan our put-in point and our take-out. We decide which lakes to travel through, which portages to take and which campsites to stay at. Before we put a foot in the canoe – the entire crew has a tremendous amount of information in their head and on their maps to help them stay on course. So, while you may slip away for a moment’s “relief” and get turned around . . . . you’re a long way from “lost”. You will always know what lake you’re in, what lake you’re going to, what your headings are and typically what lakes are around you. When most people say the word “lost” – what they typically mean is that they don’t know which direction to travel in to find their crew or to put themselves in a place where someone will eventually pass by. They need a way to “orient” themselves – to find the prime directions of North, South, East or West. Honestly, the rest should be in their head – at least on a gross scale – let’s say 5 to 10 miles in any direction from their current location.

Given I know these things – I am not “lost” in that I don’t know where the heck I am on the face of the earth. But, I may be a bit turned around on the fine point of just where exactly I am in following the course I have plotted. That’s the starting point for keeping yourself “found”. And, finally, that’s the whole point of this post . . . . a number of methods to keep yourself oriented. Some high tech . . . . and one as simple as a stick and two stones.

Orient: to set or arrange in any determinate position especially in relation to the points of a compass

to ascertain the bearings of

For the purpose of this post, I am going to provide you with four simple methods of finding North. Knowing that, you should be able to orient yourself in such a way that, if need be, you could walk yourself out to safety. We are going to look at “sticks and stones”, stars, a compass and finally a GPS.

Well, actually a stick and two stones. Your initial setup looks like this: 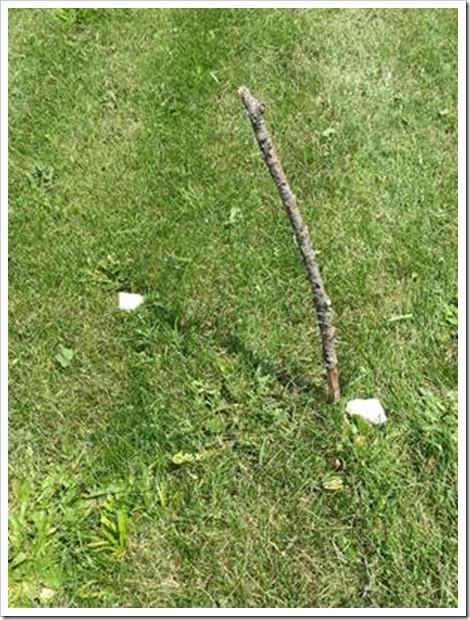 Place a stick in the ground in an area what has clear sunshine and no interfering shadows. Find two rocks, place one at the base of the stick and the other at the tip of the shadow cast by the stick. This direction will indicate West. Remember, the sun rises in the east and casts shadows towards the West. Even in late afternoon, the shadow cast by the tip of the stick will journey from West to East.

Wait a fairly lengthy period of time – a minimum of 30 minutes – I waited about an hour while I mowed the lawn. Return to the stick and place your second rock once again at the tip of the shadow cast by the stick. It will look something like this. Note I have placed a compass between the stones indicating Magnetic North. 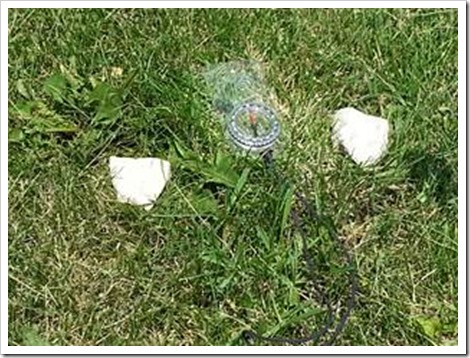 With this bit of information in your hand, you can now orient yourself to your surroundings, evaluate your immediate situation and then determine if you need to begin walking out. As an aside, it is typically a much better choice to simply remain where you are, especially if you are traveling with a group, and wait for them to find you. Whistles, small signal fires and signaling mirrors – to mention just a few – are easy methods to signal those looking for you.

If you plan to spend any time in the wilderness – please take some time to learn some basic astronomy and the location of the major seasonal constellations. These can offer a great deal of assistance should you find yourself “disoriented” and need a hand finding North again.

That said, perhaps the two most common constellations folks can find are the Big Dipper and the Little Dipper. Start by looking up at the sky at about 45-degrees. Do this in as open an area as you can find. Most folks can find the Big Dipper easier than the Little Dipper – it is just a tad brighter. Once you find the dipper end, look about a fist’s worth of distance away along a line made by the two stars that make the end of the cup. The star you will see is the North Pole at the end of the ladle of the Little Dipper. To help you confirm the Little Dipper, look about a fist’s distance away from the ladle and you will see a constellation in the shape of a “W” – this is Cassiopeia. Using this simple method you can once again orient yourself to which direction is North and begin to plan your exit. Also note that the orientation of the Little Dipper, Big Dipper and Cassiopeia changes with the season – hence my encouragement that you spend a bit of time with some star charts to lean the sky during the different seasons. The month is in the lower left corner of each of the following charts. 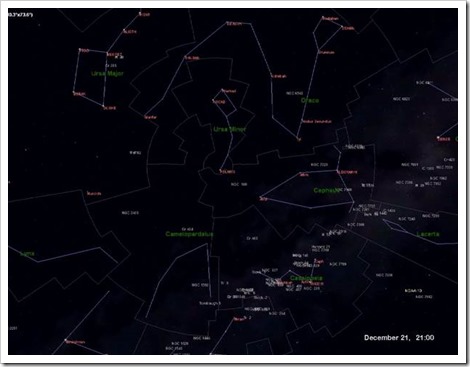 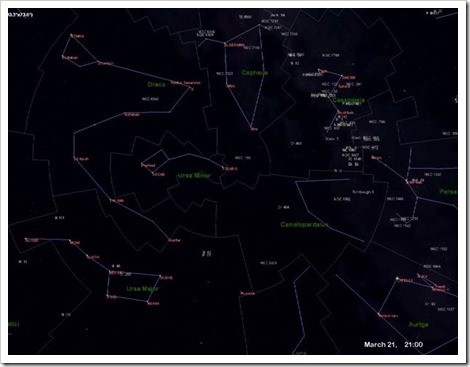 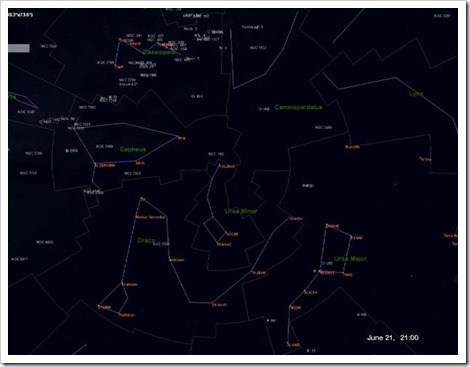 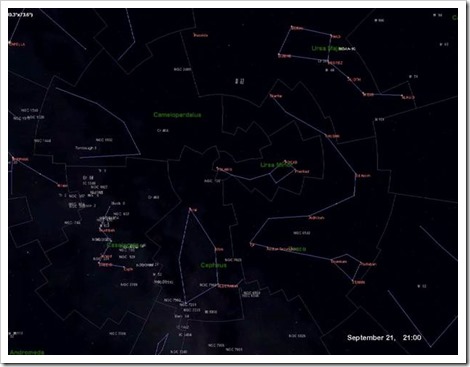 It’s a simple method to learn and can help take away the initial fearful jolt should you ever become disoriented.

An ancient device a modern day compass is a simple “needle” with one tip carrying a “south pole” and the other a “north pole”. They are marked in such a way that typically the RED half of the needle will point North while the BLUE portion points south. There are any number of variations on this theme, below is a typical compass that is a great beginner’s tool. 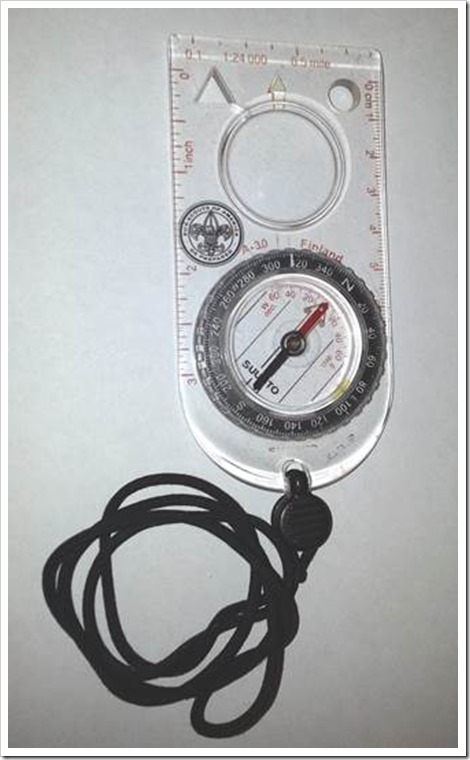 A compass takes all guess work out of which way you are headed and should be a part of your wilderness kit as well as your EDC. I have one in my go bag, this particular one in the console of my Jeep, I have one on my Casio Pathfinder watch that I wear and, of course . . . “there’s an app for that!”

If compasses seem a mystery to you – please, take some time to learn that skill set. I’ll do a post on it later, but the proper use of a compass should be considered a basic building block of your prepping and survival foundation.

A GPS uses a network of 24 satellites that are in a low earth orbit. By detecting the their signals and determining the amount of time it took for the signal for a specific satellite to travel to the GPS unit, it can then calculate the distance between the satellite and the unit. Find the distance between a unit and 3 satellites – you can now pin point your location on the planet. Add a few more and you can detect your position to within 20 feet or so. Add in an earth based correction unit – you can take that down to inches. 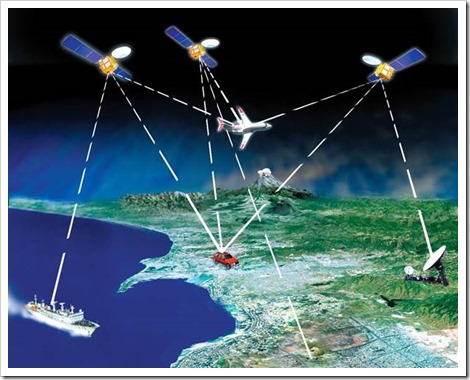 This has been a stunning technology to follow. When I worked at Rockwell in the very early 80s – these units were reserved for naval battle groups and were the size of a chest freezer. They are now contained in virtually every cell phone. Amazing.

My current GPS of choice for wilderness travel is the Garmin cx60.

There are a couple of cautions about GPSs. They are easy to become dependent on. The map reading skills of most folks is deteriorating rapidly. On a wilderness trek remember – electronic devices simply delight in dying at the most inconvenient time. Second, since they are dependent on a network of satellites, they are vulnerable to sabotage, solar storms and EMP attacks. While I enjoy mine a great deal, use it on virtually all treks and paddles – it is a confirmation device only to my compass and map reading skills.

So there you have it – 4 skills you should simply know if you are serious about preparing for an unknown future or a trek that will take you far from the benefits of civilization.

Posted by eiaftinfo at 5:35 PM