Uncle Ted was the husband of my mom’s older sister Esther. To say Mom and Esther mixed like gasoline and gasoline would be an understatement. One of Mom’s favorite stories is how she would sneak out to the outhouse and swipe the catalogue just before Esther made her “visit”. She would belly laugh, turn just a bit red . . . and laugh some more. Unfortunately, under this was true animosity between them and it lasted until just weeks before mom’s death. Fate lead both to the family cemetery where they had a fully unexpected meeting . . . and finally made their peace. Neither ever shared what was said, but I’ve always been grateful that they had that final conversation.

As I’m sure I’ve said in some post – my dad died just before Christmas when I was 7. Mom would not marry for another 20+ years and in the intervening years of my youth Uncle Ted helped fill the gap. He taught me to shoot, took me hunting, fishing and for summer vacations at their hand built cedar log cabin “up north”.

Ted and Esther never had children and Esther’s relationship was as volatile with her three other siblings as it was with my mother. Of all the cousins, I probably got the most time with Uncle Ted. And he’d love to tweak me and tell long and involved stories (gee – wonder where my love of storytelling comes from). He also truly enjoyed cooking – basic, old fashioned “meat and potatoes” cooking. Two meals have always stuck in my mind.

It was his tradition to serve raw sauerkraut and raw rutabagas as a meal just after midnight on New Years Eve/Day. I do not remember if he ever told me why, it was simply to be done.

The other meal was Muskrat Booya. Muskrat is a bit of a traditional dinner in the area of Saginaw, Michigan . . . well, perhaps in the ‘20s anyway. Thousands would gather around Saginaw Bay in the spring for a feed of Muskrat. Uncle Ted was one of the “young’uns” then and saw fit to carry forward the tradition. It was a day-long affair. He had a small wood stove in his “shop” that would act as his cook stove. We would travel to trappers he knew along Saginaw Bay and buy a handful of sizable Muskrat. These would then be brought home and slowly simmered for a couple of hours is lightly salted water. They were then taken out and the meat stripped from the bone. The meat is extremely dark with virtually no fat at all. It’s also quite sweet to my taste. With the meat out of the remaining broth, he added potatoes, a chopped onion and kernel sweet corn to the mix along with some chicken stock broth and again let it simmer for nearly an hour. At that time the Muskrat meat was returned and it was then heated through. The result was a rich but thin “booya” that you could then salt and pepper to your taste in your own bowl. It’s an odd ritual to remember, yet it’s perhaps my fondest memory of Uncle Ted.

So, in his honor, I periodically repeat the ceremony – though I use a gas range instead of a wood burner. The son of a fellow Ike traps and last year got 80+ of the little critters. He saved me 4. I did a pot last spring and with a new season fast approaching, I needed to cook up the remaining two. The recipe is simple:

In a large dutch oven, slowly simmer the Muskrat until the meat easily falls off the bone. This is typically around 1 ½ hours.

Remove the meat and set aside. Cube the potatoes, slice the onion and combine with the corn in the remaining broth. Add the Chicken broth to the mix and simmer until the potatoes are VERY tender.

While the vegetables are simmering, strip the meat from the bone. When the potatoes are tender, return the meat to the mix and heat through.

If you wish to thicken the mix, remove part of the liquid and replace it with an equal amount of cold water into which you have dissolved corn starch (if you use flower, the booya will become cloudy – you want it to remain clear).

Simply serve in a bowl with a good red wine. Salt and pepper to taste. 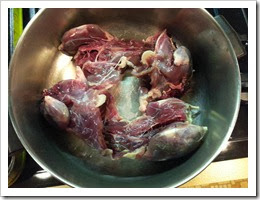 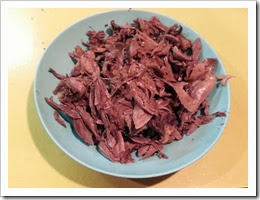 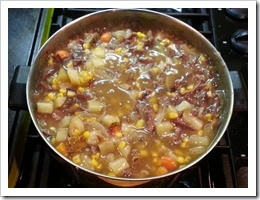 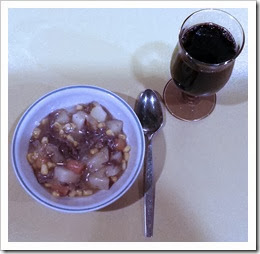 And yes . . . there was only a single bowl needed for last night (refilled once).  My wife has yet of “acquire” a taste for this particular tradition . . .

The meal is a great “conversation piece” provided you can get folks past the word “rat” in the name. These critters just eat the green vegetation along the riverbank. And while they look a bit “rat-ish”, I find them very tasty! As for this coming trapping season, I’ve put in an order for a smallish beaver – around 20 pounds or so. Going to try a similar stew, probably bake a hindquarter and then will put one on the “barbie” , I’ll let you know how it turns out.