Add to that the latest training method, trainer, shooting school . . .

Anyway, as I’ve mentioned before I find myself on a precision rifle shooting journey.  My large caliber rifle is the RPR in .308.  Honestly, that’s pretty pricy to shoot and I’m not ready for the whole reloading rabbit hole.  So, I’ve working out a lot of the mechanics with the RPR in .22 LR.

I did my first range trip with it in quite some time this week.  I am always working on the fundamental stuff . . . good cheek weld, good use of a rear bag, keeping the scope level, not wrapping my hand entirely around the grip by keeping my thumb alongside the grip rather than around the grip, smooth trigger press, managing my breathing, focusing on the crosshairs and not the target, working the bolt smoothly . . . I’m sure there are other things but these are a good place to start.

My distance was 50 yards and the target is one of my own design.  It has 12 2-inch individual targets each with a 1-inch center.  I typically shoot 5 rounds per target – a total of 60 rounds will fill out the target.  For me that’s about enough for one trip.

After my range trip I posted some thoughts to my FB page and two different company pages – eIAft’s page (my company page) and NAPSI’s page (a second training company I am involved with).  These were my thoughts . . .

Quick range trip today with my Ruger .22 Precision Rifle. It's probably been 5-6 months since my last range trip with this particular firearm. I use it to work on all the "mechanics" for precision shooting, however, I just shot from the bench today.

I used a new target I whipped up. It has 4 rows of 2" targets each with a 1" center. 5 rounds per target (though I just cleaned out leftovers on target #12). Had an interesting trip, perhaps learned a few things.

I noticed most groups were 1-inch-ish low and right. Finally before starting the last row I moved the zero up 1" and left 1". Holy crap!!! All over the place!! Through incremental adjustments I ended up exactly where I began - at the zero as it had been when I last shot the rifle.

With that I shot the final row. Notice the significant improvement with target 12 being a total of 8 rounds.

I have a whisper of a memory that says something like . . . to check zero before getting serious run a couple rounds through the rifle, move the turrets both plus and minus of the defined zero, then reset them to zero and check zero again. Something about re-tensioning the reticle comes to mind. If any of you real shooters out there have a clearer memory of this, drop a note.

Not going to be many of these days available for the next 6 months or so . . . heavy sigh.

A fine time was had! 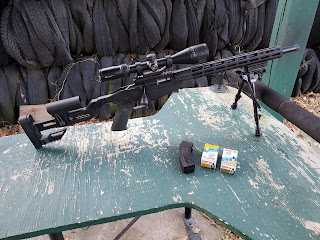 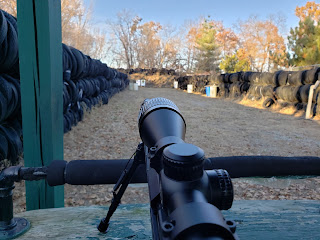 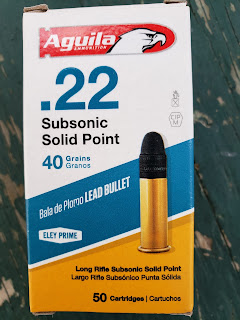 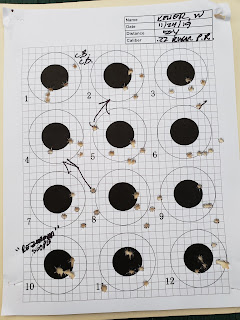 Discussions that followed revolved around a confirmation of the +1/-1 turret turn after firing the cold bore shot.  And, a conversation with another shooter I listen to that prompted this post . . . just how am I evaluating the target results given that I don’t really know the consistency of the ammunition I was using – Aguila .22 subsonic Solid Point and some Aguila .22 Pistol Match Competition thrown into the mix for good measure.

That is what I want to chat about here . . . how do you evaluate your targets.  And, is your evaluation reasonable?  Most folks are susceptible to self-criticism . . . I expect to make a single hole . . . every round of fire.  My reality differs from this expectation.  So what am I paying attention to, all the little nuances of making a consistent shot . . . or the fact that my group sizes are simply not 12 single holes?  How do we find balance so that we can give ourselves good, reasonable, solid feedback on the range and not just get grumpy with our results?

Let’s start by looking at a marked-up target.  In this target I circled the 3 best rounds out of the 5 I fired at each target.  As noted above there were 3 complete flyers. 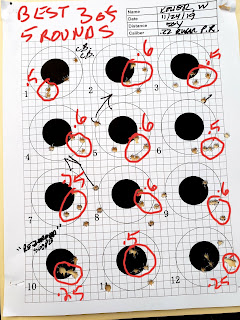 So what can we derive from this?  Let’s start with target #1 and the cold bore , clean bore shot.  It was high/right but within an inch of the target center. The CB shot should be fairly consistent.  The remaining 4 rounds created one 3-round group of .5” and another ½” inch out.  As the round continues through the first 9 targets, I was able to create a group of an average of .52” for the three closest rounds and simply discounted the two farthest out.  Ya but, ya but, ya but . . . you say, why discount the remaing 2 rounds per target?  My argument in grabbing the 3 best is that I have no real way of knowing how consistent each individual round in in the box . . . so by taking the best 3 rounds I am trying to increase the overall accuracy of the box of ammo by only taking the 60% that were closest being the same.  Were I actually building the individual rounds I could guarantee the bullet weight, case dimensions, amount of powder, seating depth, cartridge length . . . to ensure that each and every round was as identical as I could make it.  Here, when I’m buying bulk ammo, short of buying match grade rounds, the 3 of 5 option isn’t a bad way to go in my humble opinion.


That said, by the time I’d gone through 9 targets, 45 rounds, the frustration grew to the point that I though perhaps my zero has slipped or the scope itself had some issues.  So, I re-zeroed the rifle.  As I was doing that, I realized that after my initial adjustments of 1-inch up and 1-inch left the results were even worse.  As I worked by way to a proper zero and suddenly realized I was back “home” to the zero setting on the scope.  That was when the memory light went off and the reminder to go +1/-1 on both the elevation turret and the windage turret after the first few rounds.  This memory was confirmed by a good friend who is a long-range shooter.  As we’ve often discussed, it’s always the little things . . . and there are a lot of little things.


With this “adjustment” made the last row went much better with 2 of the 3 groups coming in at .25 inches.


So, what conclusions can be drawn from this little exercise.  Well, first . . . have this conversation with yourself.  Create a range diary or a simple blog and put your thoughts down.  I always learn new things by having words move from my head through my fingers to the “paper”.  And isn’t that what a range trip is for – to learn things, to practice what we learn in training and to grow as a shooter?


Second, I am consistently shooting 1 MOA groups with this particular rifle.  I’ve search for a definitive expectation of the RPR .22 cal and can not find one but it seems that most are right at that limit (which would be .5” at 50 yards).  So, I seem to be shooting to the limit of the rifle which provides some level of confirmation that I am performing the foundational steps consistently.  THIS, this right here . . . is why I am doing this, to ingrain these small individual pieces of learning so that when I move to my full-size RPR in .308 I don’t need to spend a couple bucks a round to learn these things.


In my area I know two very fine precision shooters.  A fellow by the name of Dave Coots who is a bench rest international level shooter that has competed around the world and throughout the US.  He shoots 5,000+ rounds a year – all of which are handmade, including the individual bullets.  He does make a single hole at 100 yards.  The second fellow is Jim See – a national PR shooting champion shooter on the professional circuit.  He easily shoots 5,000 rounds a year, the vast majority of his rounds are also hand crafted.  Honestly, I am never going to shoot that many rounds annually, nor am I driven to do so as these two fellows are.  But, if you want to shoot at their level THAT is what it’s going to take.


Bottom line, make reasonable evaluations of your targets.  Don’t bang on yourself if your range trip isn’t up to your expectations.  Work to figure out the “why” and then move to the “how” to improve your shooting.


And as part of the mix of figuring out the “how” to improve, call on friends and shooters for a hand.  I believe that this in a unique journey that is shared by few.  But those folks just plain love to help.  I’ve never received a nasty comment or a laugh . . . but have always heard . . . “Have your tried this?”  or “When I worked through that, here’s what I did.”  We are part of a great community . . . and for that I’m grateful.

Posted by eiaftinfo at 4:35 PM 2 comments 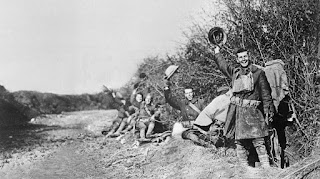 
Throughout my life the first half of this phrase is what folks have always associated with Armistice Day.  That day when WWI – the “war to end all wars” – ended.


In 1926 the date became recognized as “Armistice Day”.  In 1938 it became a national holiday.  And it 1954 it gained its current name – “Veterans Day”.  A day set aside to honor all veterans.  It was so proclaimed in the “Veterans Day Proclamation”


Rather than the date/time of the end of hostilities, rather than “the Eleventh Hour of the Eleventh Day of the Eleventh Month”, I would like to focus on the phrase – “The Guns Went Silent”.  The guns had raged in Europe for 4 years.  30 Million dead.  An estimated 35 THOUSAND MILES of trenches scared the landscape.  New methods of death had been developed and used – from mustard and phosgene gases to aircraft dropping bombs . . . machine guns, tanks, long range artillery . . . not to mention nature's toll from the trenches – flu, infection, dysentery, pneumonia.


Here is a link to the project “Making a New World:  Armistice Soundwave” that describes how the data for the recording was gathered.   Note that it was technology to gather data to kill the guns . . .


And THIS, THIS RIGHT HERE is what it actually sounded like . . . amazing.

I can’t imagine the relief given the horror those on the front experienced on a daily basis.

That said, this is but a moment in time of a nearly 250 year history of Americans defending American ideals and allies.  Where the American Soldier, Sailor, Airman and Marine stood, took their oath of service and faced an enemy.  Many of them have had their moment when the “guns went silent” be it an ambush, rocket attack, perimeter attack, when the immediate danger ended and they were relative safe . . . or when they boarded the “freedom bird” for rotation back to friends and family.  They were finally out of range of small arms fire, artillery fire, rockets and mortar fire . . . and the guns were truly silent.