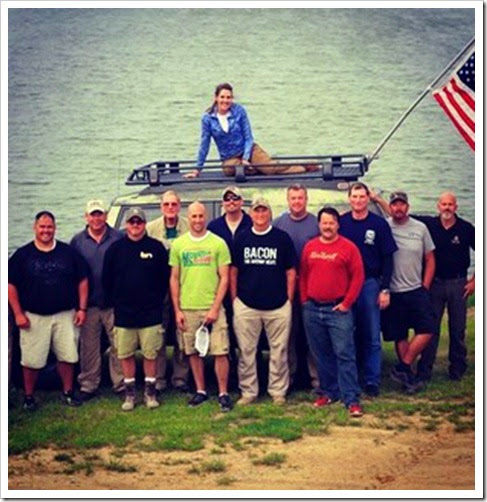 Say the name “Rob Pincus” in the “gunny” community and you seem to hear two general story lines . . . “Isn’t he the guy who has you flop your hands all round and get “off the X”?” . . . or . . . “Best class I ever took – you need to go . . . NOW!!” I’ll share my thoughts on that later, let me get down my reflections on Rob first, then the course and then whether you could add Rob’s CFS course to your list of “to dos”.

Were I to sum up Rob Pincus in a single word it’s PASSION!!!!! (Caps, Bold, Underline and explanation marks fully intended). From his first words on the pad as we started our morning brief to the last conversation I had with him during the exit brief – it was crystal clear that Rob is passionate about CFS, passionate about teaching and passionate that you learn, absorb, integrate, demonstrate and are successful at learning what the CFS course has to teach.

He is equally passionate that you understand the “whys” of what is taught as well. He’s NOT a “do this because I say so” kind of guy – there is depth, experience, research, understanding, behind each and every component of the CFS course – from the distances that most the shooting takes place (12-15 feet), to the simulated “flinch” response, to moving during the response, to moving during reloads, to real – honest to God assessment prior to your reholster. There is a reason for everything, backed by a broad range of knowledge that is shared liberally throughout the course.

“I am NOT your life coach!!” Yep, that was pretty damn clear within the first few tens of minutes of the very first shooting drill. I’d been having “problems” with my ammunition for a while. Double feeds, failure to eject, failure to feed . . . I’d begun to purchase from a new Iowa manufacturer and I was certain it was the ammo. After all, I’d run countless thousands of round through my Glock 17 with a 99.99999999% success rate – until I switched ammo . . . now the problems. This issue poked its head up a few rounds into the first set of drills.

“What’s your name!!” asks Rob – his FULL “outside” voice on display.

“Bill, my gun seems to be jamming a lot here!” I explain as I am trying to free the slide enough to eject the round and the magazine.

“What the hell!! You’re making Glocks look bad in front of the 1911 guy!! Cut that shit out!! Clear the damn gun!!” (paraphrasing here just a bit).

Finally . . . “Oh for God’s sake – give me the F’in gun!!!!!” Rob grabs the slide, smashes the shit out of the grip and the round flies free. Then he drops the mag and gives the gun back – then examines the magazine.

“HERE’S THE F’IN’ PROBLEM – YOU BOUGHT A GREAT GUN AND THEN PUT A SHITTY KNOCK-OFF MAGAZINE IN IT. LOOK AT THIS!! CHEAP PLASIC, THIN BASE PLATE, IT IS NOT STEEL LINED!!!” Then as he draws his arm back and launches the half-filled mag down range says “NEVER BUY A PIECE OF SHIT MAG FOR YOUR GUNS – THAT’S JUST F’IN’ STUPID!!!” . . . he then returns to the end of the line . . . and our drill begins again . . .

There was no malice in his words and while there was some anger – it was directed at what could have happened should I engage a real threat in a real place with a piece of shit magazine in my gun. Not good. It also acted as a starting point to let the class know he was not there to be our “life coach” . . . but that what we were learning was serious shit, we needed to get our head in the game and that he was determined to make sure each and every one of us understood the content – and “in your face” would be a learning tool – not the only tool, but part of the “kit”. And so it was.

That also amped up the energy on the range as well. It’s impossible to simulate the stress of being involved in a real “dynamic critical incident” – but, you can increase the stress on a range, you can push students until they make mistakes, you can demand excellence and allow them to fail and correct . . . and Rob had no hesitation to push us to be perfect, to do better, to have us expect to make the shot – not just “hope” to.

Those not experienced with a high energy instructor, a demanding instructor, a “LOUD” instructor quickly learned to listen to the words, understand the reasons for the demands being made on them – and then get with the program, do the work and learn what’s being taught.

The course was “layered” – beginning with a “by the commands” – “extend” (your firearm), “touch” (the trigger) “press” (the trigger to the rear in one smooth motion).

And, ending with a “Figure 8” drill with 6 different targets with numbers, shapes and images spray painted on them in red paint. As you walked around two paint cans in a figure 8 Rob would yell out “The coolest F’in animal ever invented!!” and you had to . . .

So I extend and send one more round into the target.

My magazine runs dry on the next target . . .

Reload complete, I am back at the high ready looking for more threats.

And so it went for all of us until our loaded magazines were empty.

Look at the difference in complexity between the first drill on day 1 and the Figure 8 drill on day 2 . . . orders of magnitude more difficult . . . but much more realistic than the overwhelming majority of drills most firearms teach as their stock and trade.

Balance of Speed and Accuracy

Most gunfights are close and fast. It’s imperative that you be able to get combat effective hits quickly. For close distances, 9-15 feet, sighted fire is simply not needed. Look at the threat, focus on center mass, drive out to the threat and engage with 3 to 5 rounds. Assess your situation, look for other threats . . . repeat as necessary.

That said – there are times when sighted fire is necessary - longer distances or the specific need to take a difficult shot under stress. These were integrated throughout all the drills – rapid engagements of boxes that simulated the center mass of a threat with the sound of “5!!” interspersed meaning a single round was to be placed in the center of the circle with a “5” on it.

In addition to verbal demands, pushes, challenges . . . there were physical stressors as well . . .

We all ran towards the middle firing line (about 21 feet) as quickly as we could . . .

We stop, do a startle response, draw our firearm, move left or right and engage our target with 3-5 shots. Then we assess our situation and reholster . . .

We run to the front line

Startle response, draw your gun, move left or right, and place a single round in the 2-inch circle that is the “Number One”, assess the situation, reholster . . . .

At this point we were being stressed mentally (follow the commands), physically by running back and forth and finally – we were still expected to hit the target . . .

And so it went.

Worth the time and money?

There are no shortcuts – ever. If it is your intent to be the best defensive shooter you can be – you need solid course work, consistent training on your range and a dogma that is designed to actually respond to the way your body functions and then provide you the ability to roll with that and “stop your threat”. I am convinced that as to today – Rob’s “Combat Focus Shooting” provides a solid foundation to do exactly that. Still – it’s a starting point. Past that it’s up to you to train on your range to cement what you take away from his CSF course and to continue to learn.

Posted by eiaftinfo at 2:46 PM